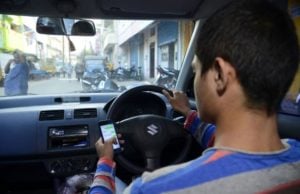 A routine part of law enforcement duties includes monitoring the speed of vehicles and ticketing those who are traveling above the posted speed limit. However, a new road safety study suggests that drivers checking their speed too often can create a dangerous distraction.

The study, done by researchers at the University of Western Australia, used a driving simulator to test the effect of differing levels of speed enforcement on drivers. Researchers told participants that they fines for speeding would be enforced at 1, 6, or 11 kilometers per hour over a posted speed limit of 50 kilometers per hour. They then tested the drivers’ responses to an input (red dots appearing in the peripheral vision of the participants) at the varying levels of enforcement.

According to the lead researcher, Dr. Vanessa Bowden, the results showed that those who were subject to very strict enforcement, those who could be fined for speeding at just 1 kilometer per hour over the speed limit, were the least likely to notice the dots in their peripheral vision.

What Do These Results Mean?

The idea behind using red dots in the peripheral vision of the participants was to see how well drivers notice other things going on outside of their direct line of vision when checking their speed. Imagine that the red dots represent pedestrians, animals, bicycles, or other things that may appear in your peripheral vision, and you can understand why not noticing them would be a safety issue.

The researchers concluded that drivers who had to spend more time checking their speed — when speed limits were more strictly enforced — did not have the normal amount of attention directed toward what was going on around them.

According to Dr. Bowden, “there can be a perception that by making it stricter you’re only going to get benefits, like you’ll get everyone driving more slowly and more safely … but you can’t necessarily make drivers pay more attention to the speed and go more slowly without taking their attention away from some other critical aspect of driving.”

Does This Mean We Should Get Rid of Speed Limits? Or Should I Ignore The Speed Limit?

Although the researchers concluded that enforcing the speed limit too strictly could create a safety issue by the threat of distraction, they are not suggesting doing away with speed limits or not paying attention to the posted speed limit. They are suggesting that perhaps strict enforcement of the speed limit is not as beneficial as some law enforcement officers believe. Speed traps are a favored tool of local police officers and the highway patrol, but they should consider easing up on how strictly they enforce the speed limits, so car accidents can be prevented and drivers can focus on the road instead of obsessing about their speed.

As far as the effect of this study on your driving habits goes, it is good to be aware that checking your speed too often can create a distraction. Speeding is not encouraged, but perhaps using the cruise control a little more can help you keep your focus on the road instead of on the speedometer.