Our firm is actively investigating these claims and we would love to help you however we can. For a FREE, no-obligation consultation with an experienced Camp Lejeune liver cancer lawsuit attorney, please call 1-800-525-7111 and let’s review your claim.

There are no attorney fees unless we recover compensation for you. We don’t get paid unless you do. Call 1-800-525-7111 and let’s discuss your potential Camp Lejeune liver cancer claim.

Click to call for a free consultation!Diagnosed with liver cancer after living or working at Camp Lejeune?

KEEP IN MIND: Criteria for Camp Lejeune liver cancer claims may evolve as evidence is evaluated. Our attorneys can evaluate your claim for free and help determine if you are eligible for a Camp Lejeune claim.

Did Contaminated Water at Camp Lejeune Cause Liver Cancer?

There is a long history of water contamination at Marine Corps Base Camp Lejeune, a 246-square-mile U.S. military facility in Jacksonville, North Carolina. From at least 1953 through 1985, military personnel, their families, and civilian workers at Camp Lejeune drank and bathed in water contaminated with dangerous chemicals. According to the Department of Veterans Affairs (VA), these contaminants included benzene, industrial solvents, and other chemicals, many of which have been linked to cancer, including liver cancer. Scientific evidence suggests that contaminated water at Camp Lejeune could have caused liver cancer as well as many other types of cancer and diseases.

Significant research has confirmed the presence of potentially cancer-causing contaminants in the water at Camp Lejeune. One such research study by the Agency for Toxic Substances and Disease Registry (ATSDR) found that levels of trichloroethylene (TCE) were 1,400 parts per billion (ppb), while the current limit is 5 ppb. Water contamination at Camp Lejeune in some areas may have been present at concentrations 240 to 3400 times the allowable limits. Chemicals known to have contaminated the water supply at Camp Lejeune include volatile organic compounds (VOCs) like trichloroethylene (TCE), perchloroethylene (PCE), vinyl chloride, benzene, and other compounds. These specific chemicals have been linked to cancer, including liver cancer. In its landmark report on health risks associated with water contamination at Camp Lejeune, ATSDR included liver cancer as one of 16 diseases directly linked to the contaminants.

The National Cancer Institute at the National Institutes of Health (NIH) reports that trichloroethylene compounds are associated with cancer. The organization states that TCE exposure has been linked to kidney cancer, and that “some evidence suggests that it may be associated with increased risks of non-Hodkgin’s lymphoma and, possibly, liver cancer.” A significant amount of research supports this finding, and may be used by plaintiffs in potential Camp Lejeune liver cancer lawsuits.

A 2013 study published in the Journal of the National Cancer Insitute supports a link between liver cancer and TCEs, as well. The article reports that an analysis of a study on TCE exposure among a cohort of workers found “statistically significant elevated standardized incidence ratios (SIRs) for cancers of the liver.”

A separate study in the same journal, also from 2013, also suggests a link between liver cancer and TCE exposure similar to what thousands of military personnel, family members, and workers at Camp Lejeune experienced. The study’s authors concluded that “our results suggest that TCE exposure is possibly associated with an increased risk for liver cancer.”

Perchloroethylene (PCE) compounds have also been linked to liver cancer in numerous studies. A report on PCE by the Ohio Department of Health states that “PCE has been shown to cause liver tumors in mice,” and that “there is limited scientific proof that PCE causes cancer in humans.” The Agency for Toxic Substances and Disease Registry (ATSDR) reports that “in animals, tetrachloroethylne [PCE] has been shown to cause cancers of the liver, kidney, and blood system.” The Environmental Protection Agency (EPA) has also classified PCE as “likely to be carcinogenic to humans by all routes of exposure.”

A 2015 study in the Journal of Environmental Health found that “taken together, epidemiological studies provide evidence for associations between adult PCE exposure and bladder cancer, non-Hodgkin lymphoma and multiple myeloma, and possibly cervical, esophageal, kidney, lung, liver, and breast cancer.”

Vinyl chloride, one of many contaminants in the water at Camp Lejeune between 1853 and 1985, is a common ingredient in the manufacturing of PVC, often used in pipes and cable coatings. The National Cancer Insitute at NIH has designated vinyl chloride as a carcinogen, reporting that “vinyl chloride exposure is associated with an increased form of rare liver cancer (hepatic angiosarcoma), as well as brain and lung cancers, lymphoma and leukemia.”

A 2019 study in the World Journal of Gastroenterology found “compelling evidence of a strong association between VCM exposure and HCC [hepatocellular carcinoma, a type of liver cancer] risk.” The study actually determined that “as much as 29% of overall deaths among workers in the highest exposure category were from liver cancer (all types) or liver cirrhosis.”

Benzene, one of the chemical contaminants present in the water at Camp Lejeune between 1953 and 1985, is a known carcinogen that has been linked to liver cancer. While the association between benzene and leukemia and other blood cancers is strong, the evidence is less developed regarding liver cancer. That said, a 2010 study published in Carcinogenesis concluded that “benzene exposure can induce hepatic and hematopoietic tumors in mice,” raising the possibility that benzene exposure among those at Camp Lejeune may have increased liver risk.

Click to call for a free consultation!Get the justice and compensation you deserve. 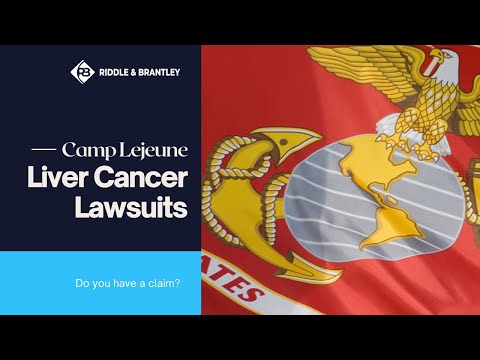 Can I File a Camp Lejeune Lawsuit for Liver Cancer? 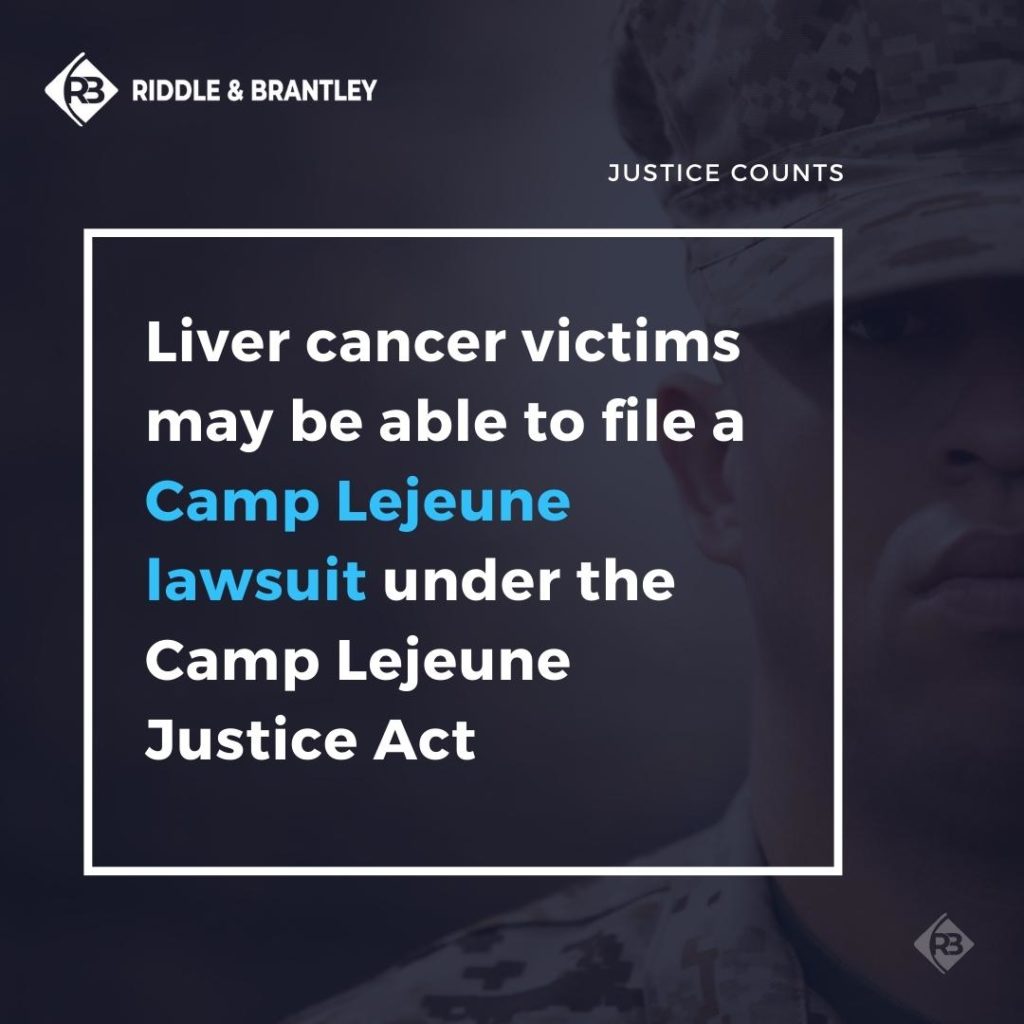 Yes, the Camp Lejeune Justice Act recently passed by the U.S. Senate as part of the PACT Act for veterans gives victims the right to file a lawsuit against the U.S. government alleging that Camp Lejeune water contamination caused liver cancer (as well as other cancers and diseases). If you or a loved one were diagnosed with liver cancer after exposure to contaminated water at Camp Lejeune, you may be entitled to significant compensation.

Call 1-800-525-7111 for a FREE, no-obligation consultation with an experienced Camp Lejeune liver cancer attorney. We are ready to help however we can.

There are no upfront costs and you won’t pay any attorney fees unless we win your case and you receive compensation. Call and let’s discuss your potential Camp Lejeune cancer lawsuit today.

You may qualify for a Camp Lejeune lawsuit if you meet the following criteria:

If you meet the criteria above, you may qualify for a Camp Lejeune water contamination lawsuit. Please call 1-800-525-7111 for a free, no-obligation consultation. Our attorneys and staff have close family ties to the military and we are proud to fight for those who fought for us. Don’t wait — the longer you wait, the harder it may be to prove your claim and get you the compensation you need and deserve. Remember, we don’t get paid unless you do.

Why Riddle & Brantley for Your Camp Lejeune Liver Cancer Claim?

Since 1985, Riddle & Brantley has been fighting for veterans and others injured due to others’ negligence. We have offices in Jacksonville, North Carolina and have close ties to the men and women serving at Marine Corps Base Camp Lejeune. We’ve recovered over $665 million in compensation for our clients since 2000 alone (see disclaimer below), and we’d love to help however we can.

Our experienced trial lawyers have been recognized for their results and client service by many prestigious memberships and awards (see disclaimer below), including:

If you or a loved one have suffered from liver cancer (or another cancer or health problem) after being exposed to contaminated water at Camp Lejeune, you deserve justice and may be entitled to compensation in a Camp Lejeune lawsuit. Please call and let’s review your Camp Lejeune liver cancer claim. We’d love to help however we can.

Justice Counts for our military service men and women, their families, and those working on behalf of our military. Don’t wait — call 1-800-525-7111 today and let’s review your claim.