Riddle & Brantley is currently investigating claims from former service members, family members, and civilian workers who suffered from multiple myeloma (and other cancers and conditions) after being exposed to contaminated water at US Marine Corps Base Camp Lejeune.

Give us a call at 1-800-525-7111 for a FREE evaluation of your case. We will help you understand your options and you will not have to pay any attorney fees unless we win compensation for you in your Camp Lejeune multiple myeloma lawsuit or claim.

Because of the Camp Lejeune Justice Act (passed as part of the PACT Act on August 2, 2022), victims of water contamination at the base will be able to file Camp Lejeune lawsuits and claims directly against the federal government, even if a previous claim was denied.

Did Contaminated Water at Camp Lejeune Cause Multiple Myeloma?

Water contamination by toxic chemicals is a major risk to public health. Exposure to toxic water has been linked to several diseases, including cancer and congenital disabilities.

In 2016, the Marine Corps discovered elevated levels of trichloroethylene (TCE), a carcinogen, and other toxic chemicals in the water at Camp Lejeune, North Carolina, a Marine base where many people were exposed to the contaminated water. The water contamination was caused by a variety of issues, most notably from runoff from a nearby dry cleaning operation. As early as 1953, service members complained of health problems potentially associated with the water contamination, including multiple myeloma.

Although the Marine Corps found no evidence that the TCE was directly responsible for these cancers, it has taken steps to correct the contamination. As part of an ongoing effort to remediate the damage done by its predecessors, the Marine Corps is working with local authorities and contractors to update the aging aqueduct system that provides drinking water for residents who live near Camp Lejeune. This effort is expected to last for years and cost millions of dollars.

Multiple myeloma claims and other claims against the Marine Corps, Navy, and federal government at large related to water contamination at Camp Lejeune are supported by significant scientific research. The chemicals found in the water at Camp Lejeune have been tied to serious health problems across many scientific studies, including direct ties to the development of multiple myeloma.

Trichloroethylene (TCE) is a suspected human carcinogen that has been used as a solvent for decades. It has been shown to be capable of damaging DNA and causing mutations, which has caused concern about its possible role in the development of certain cancers, including multiple myeloma. 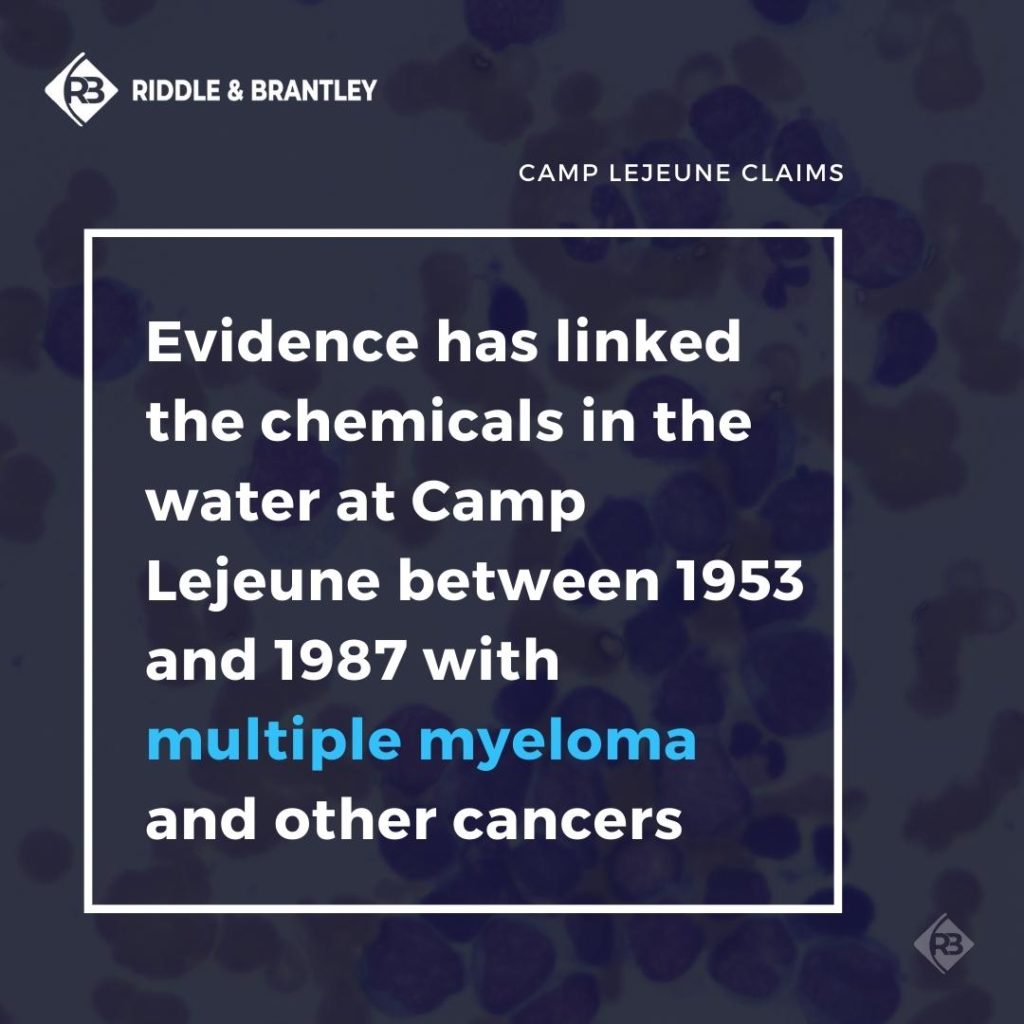 There is currently no definitive explanation for how this happens, but one possibility is that TCE disrupts the way DNA is packaged, allowing mutations to occur more easily. Although there is strong evidence that TCE exposure increases the risk of developing multiple myeloma at some level, it will remain unknown how high this risk may actually be until further studies are done.

Another significant risk factor for multiple myeloma that was found in the water at Camp Lejeune was perchloroethylene. Perchloroethylene (PCE) is an industrial solvent that is used in everything from dry cleaning to plastic manufacturing. As a result, exposure to PCE is a significant risk factor in developing multiple myeloma (compared to those that haven’t been exposed).

“I Was Exposed to Toxic Water at Camp Lejeune. What Should I Do?”

If you were exposed to the water at Camp Lejeune between 1953 and 1987, you should first consult with your healthcare provider to look out for symptoms of multiple myeloma and other diseases.

If you are currently experiencing any of these symptoms, contact your healthcare provider immediately to determine their cause and a course of treatment. If you are diagnosed with multiple myeloma, you may qualify for a Camp Lejeune multiple myeloma lawsuit. 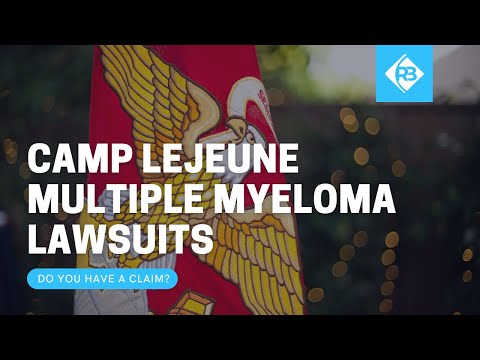 How to File a Camp Lejeune Multiple Myeloma Lawsuit or Claim

Victims of this chemical exposure at Camp Lejeune can now file claims related to Camp Lejune water contamination, even if their claim was previously denied.

To file a Camp Lejeune lawsuit (including one involving multiple myeloma), you must meet the following criteria:

Get Help with Your Camp Lejeune Claim Today Riddle & Brantley is an experienced personal injury law firm that can help you determine the best legal options for a multiple myeloma lawsuit or claim against the federal government. We offer FREE consultations, and you never pay any attorney fees unless you receive compensation.

We have offices just down the road from Camp Lejeune in Jacksonville, NC, and have handled hundreds of claims in the Eastern District of North Carolina, where Camp Lejeune multiple myeloma claims must be filed. We serve clients nationwide and can consult with you for free from anywhere by phone, email, text, or video conference.

We’ve recovered over $665 million clients since 2000 alone (see disclaimer below), but we’re most proud of the positive experiences our clients have when working with our firm:

Our Camp Lejeune multiple myeloma lawyers have also been recognized by many prestigious memberships and awards (see disclaimer below) in the legal community, which we’ve won by providing world-class service to the clients who walk through our door. These awards and memberships include:

Call 1-800-525-7111 or complete the fast and convenient form below to start your free, no-obligation consultation with a compassionate Camp Lejeune multiple myeloma claim attorney on our experienced team. We believe Justice Counts for those who suffered due to contaminated water at Camp Lejeune and we are ready to help with Camp Lejeune claims or lawsuits however we can.