Home » Blog » How Far Would You Go to Keep Your Dogs Safe During a Hurricane?

How Far Would You Go to Keep Your Dogs Safe During a Hurricane?

Hurricane Matthew hit our state hard and many of us are still struggling to pick up the pieces of our lives in Matthew’s wake. However, many of our four-legged friends have it just as bad as we do, losing their homes, getting separated from their families and just struggling to survive. It’s clear we need to do more to keep dogs safe during a hurricane, and one local man’s actions during Hurricane Matthew serve as a shining example.

According to WAVY-TV, one man took it upon himself to open his home up as a refuge for nine dogs whose shelter was flooded during Hurricane Matthew. The man actually opened up his home to be used as the Save A Dog-Save A Cat Foundation rescue shelter eight years ago. At the time of Hurricane Matthew, he was sheltering nine dogs. Their usual shelter began to flood during the hurricane to the point that the dogs almost drowned. The man was able to post a help message on Facebook before his phone died. Help unfortunately didn’t arrive anytime soon. Despite that fact, he stayed in the flooded shelter and kept himself and the dogs from drowning for around 10 hours.

Thankfully, he and the dogs survived. The shelter sustained a lot of damage. Things are looking up, however, as many have pitched in to help clean up and rebuild the shelter, with donations rolling in everyday after word of the man’s heroism and the dogs’ plight made the news.

For more information about this story and how to donate, watch the video below. In addition, if you would like to help other NC dogs struggling after Hurricane Matthew, you can visit the websites for the Humane Society of North Carolina or your local Society for the Prevention of Cruelty to Animals (SPCA). For Raleigh, that would be the SPCA of Wake County. 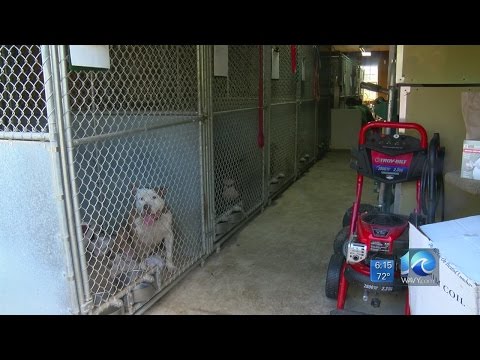