Home » Blog » Does Nizatidine Cause Cancer?

Does Nizatidine Cause Cancer? 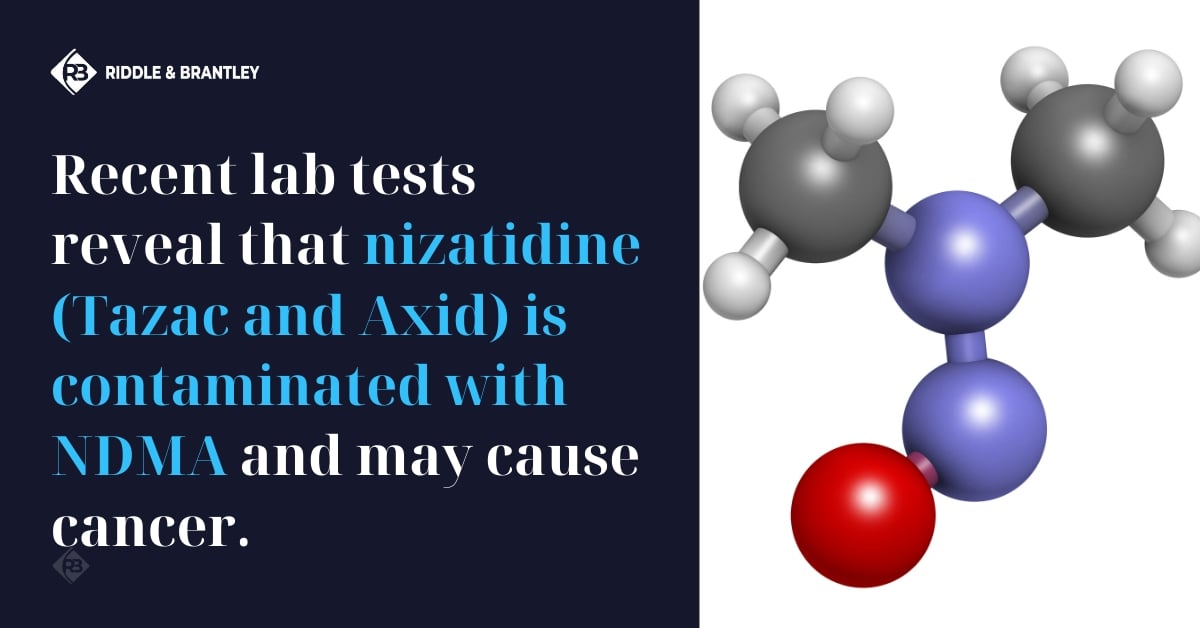 In the wake of findings that Zantac may cause cancer due to NDMA contamination, scientists, doctors and patients are increasingly worried about another heartburn medication, nizatidine. Does nizatidine cause cancer?

In late 2019, labs discovered that nizatidine (also sold under brand names Tazac and Axid) may be contaminated with NDMA, a potentially cancer-causing chemical. In early 2020, Mylan, a major U.S. drug manufacturer, issued a voluntary recall for nizatidine. A similar nizatidine recall in Canada followed in May 2020.

Nizatidine, like Zantac (ranitidine), is an H2-antihistamine blocker that is commonly used to treat gastroesophageal reflux disease (GERD), otherwise known as heartburn. It is not as common as Zantac, but potentially hundreds of thousands of people take the drug.

“Does nizatidine cause cancer?” The FDA has issued a warning that contaminated nizatidine may cause cancer.

While scientific research has not yet drawn a definitive, causal relationship between nizatidine and cancer, data indicate that elevated levels of NDMA may be associated with as many as 20 different types of cancer, possibly more.

Cancer potentially caused by nizatidine (when contaminated with NDMA) include:

Multiple recalls have been issued for nizatidine in the United States and Canada, including recalls by the following manufacturers:

The brand name nizatidine drug Axid has been discontinued in the United States. Tazac is still available by prescription.

Do you have a potential nizatidine cancer claim?

Based on evidence that contaminated nizatidine may cause cancer, our nizatidine cancer lawyers are working to hold potentially negligent manufacturers accountable.

If you’ve taken nizatidine, including brand name drugs Tazac or Axid, and been diagnosed with one of the cancers listed above, you may qualify for financial compensation. For FREE consultation with an experienced nizatidine lawyer, please call 1-800-525-7111. You can also complete the short form below if you prefer.

There is no obligation and you’ll only pay attorney fees if we win your case and recover compensation for you.

Please call 1-800-525-7111 for a FREE case review regarding your potential nizatidine cancer claim.

Our dangerous drug attorneys handling nizatidine cancer claims have been helping hold drug companies accountable since 1985. We have more than 220+ years of legal experience and are committed to justice for injured victims.

Many are asking, “Does nizatidine cause cancer?” and scientific evidence suggests that NDMA-contaminated nizatidine (including Tazac or Axid) may increase the risk of cancer in patients.

If you’ve suffered from cancer potentially as a result of taking nizatidine, Tazac or Axid, you deserve justice.

Justice Counts for victims of dangerous drugs, and we’d love to help you and your loved ones if we can.