Deodorant and Non-Hodgkins Lymphoma Risk Due to Benzene Contamination

In the wake of the alarming discovery of cancer-causing benzene in deodorants, including certain spray-on varieties of Old Spice and Secret deodorants and antiperspirants, many consumers are wondering about the potential connection between benzene-contaminated deodorant and non-Hodgkins lymphoma (NHL).

IMPORTANT: A voluntary recall has been issued for certain spray-on varieties of Old Spice and Secret deodorants and/or antiperspirants. For more information and to protect yourself and your loved ones, please visit our deodorant recall page. Our firm is actively engaged in investigating these cases, and deodorant lawsuits are being filed. If you or a loved one has suffered from qualifying cancer after using potentially contaminated Old Spice, Secret, or another brand of deodorant, call 1-800-525-7111 for a free consultation.

Can Benzene in Deodorant Cause Non-Hodgkins Lymphoma? The science linking benzene (the dangerous chemical recently discovered in several popular brands of spray-on deodorant) and non-Hodgkins lymphoma is relatively clear. According to numerous studies, there is a clear link between benzene and non-Hodgkins lymphoma, meaning that an association between benzene-contaminated deodorant and NHL may be likely.

So, what should those who have used benzene-contaminated deodorants like certain Old Spice and Secret products know about the potential risks of non-Hodgkins lymphoma? Let’s take a look at the research.

Research on Benzene and Non-Hodgkin’s Lymphoma

Studies examining the potential link between benzene and non-Hodgkins lymphoma have uncovered alarming evidence that should be considered in light of the recall of Old Spice and Secret deodorants and antiperspirants for benzene contamination.

Recent studies supporting the claim that exposure to benzene causes non-Hodgkin’s lymphoma include:

Based on these studies and other supporting evidence, it can be reasonably assumed that exposure to benzene in contaminated deodorants and antiperspirants could potentially cause non-Hodgkins lymphoma.

In the wake of an independent lab’s discovery of benzene in certain spray-on deodorants, scientists will be examining this potential link more closely. Stay tuned to our website for the latest information on the scientific research and unfolding litigation.

What is Non-Hodgkin’s Lymphoma?

There are more than 30 types of non-Hodgkins lymphoma.

Some of the more common symptoms of NHL include:

If you’ve experienced any of these or other symptoms of non-Hodgkin’s lymphoma, consult with your doctor immediately.

Non-Hodgkin’s lymphoma can be deadly, but there are promising treatments available.

NHL can be very treatable and if caught early, the prognosis is often relatively positive. According to the Cleveland Clinic, treatments for non-Hodgkin’s lymphoma include traditional chemotherapy, targeted anti-cancer medications, biologic therapy (also called immunotherapy), and radiation therapy. Patients with NHL may also qualify for a clinical trial involving new and experimental medications and therapies.

“I developed non-Hodgkins lymphoma after using a recalled deodorant. What are my options?” 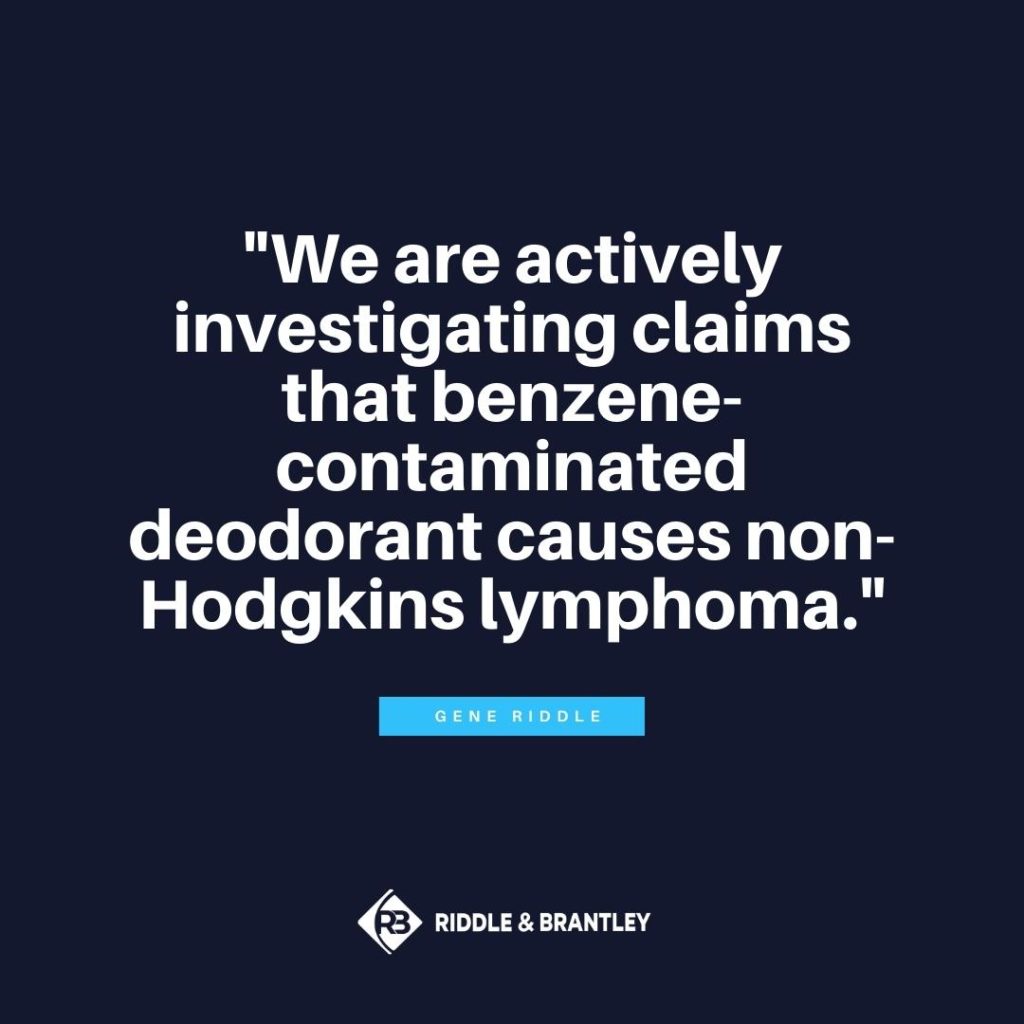 If you or a loved one were diagnosed with non-Hodgkins lymphoma after using a recalled, benzene-contaminated deodorant or antiperspirant like certain spray-on varieties of Old Spice or Secret, you may be entitled to compensation in a deodorant cancer lawsuit. At Riddle & Brantley, our experienced product liability attorneys are actively investigating these claims, and we would love to help you if we can. Please call 1-800-525-7111 for a free, no-obligation consultation concerning your potential claim.

The claim investigation is free, there is no obligation, and we don’t get paid unless you do. If we don’t win your deodorant cancer lawsuit and you don’t receive compensation, you won’t pay any attorney fees. Call 1-800-525-7111 today and let’s talk.

“Benzene in contaminated deodorant may cause non-Hodkgins and other types of cancer, and we’re committed to holding potentially negligent manufacturers accountable.”

Since 1985, our attorneys have been holding potentially negligent manufacturers like Proctor & Gamble accountable. We’ve recovered hundreds of millions of dollars in compensation for our deserving clients, and we pride ourselves on providing excellent client service (see disclaimer below). We invite you to see for yourself the Riddle & Brantley difference by calling us today at 1-800-525-7111.

Justice Counts for those whose non-Hodgkins lymphoma was potentially caused by benzene in deodorant, and we would love to help however we can.