How is Workers’ Compensation Calculated in North Carolina? 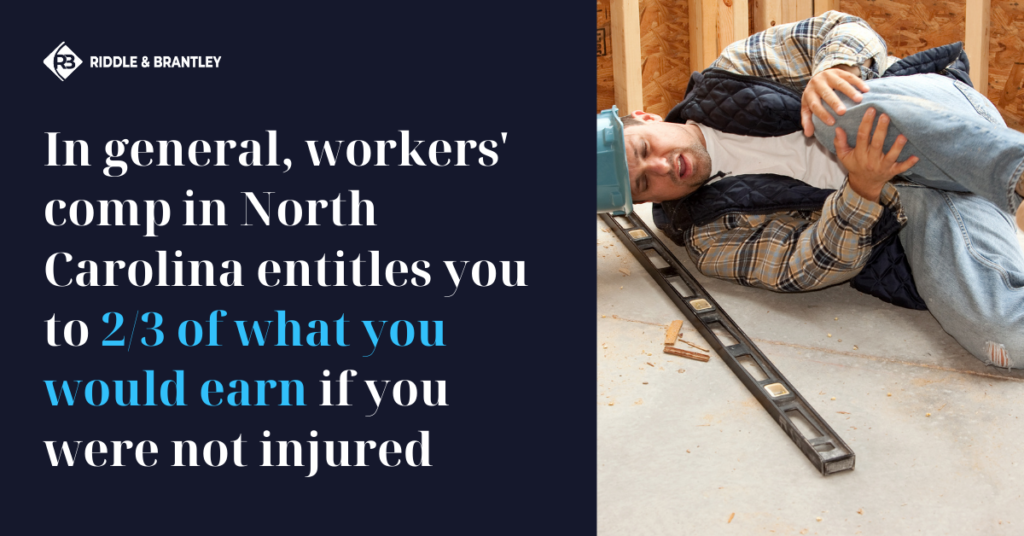 The basic rule is that injured workers are entitled to receive 2/3 of their pay, which is approximately what they would have been taking home after taxes if they had never been injured (workers’ compensation benefits are not taxed).

Of course, in reality there are many scenarios that are much more complicated.

Take for example an injured worker who was pretty new to her job. Let’s call her Jane.  Jane had just started working as a sales account associate at a firm in Raleigh. When she was hired, she was told she would be paid $20 an hour for her first 40 hours, then $30 an hour for any overtime she logged. She was told that during some busy seasons around holidays and over the summer months, she would log a lot of overtime. But other times, things would be slow and she would not even be guaranteed 40 hours a week. She was also told that because she was a new hire, she would probably work only 30 hours a week for her first couple months because they wanted her to train with a particular manager who was only in her store 3 days a week.

This all sounded great to Jane. For the first few months she would only work 30 hours a week, but then she’d probably ramp up to 40, and then start working even more and making overtime. She was excited for the future.

Then Jane got hurt on the job during only her second week at work. One of her co-workers accidentally dropped a heavy box on her desk while she had her hand on it, breaking two bones in her hand. Jane needed surgery and had her hand placed in a cast. Her boss told her that she could not come to work due to “liability reasons,” even though she felt like she could do her job perfectly well while wearing a cast. But her boss told her that she’d start getting checks from their workers’ compensation insurance, and not to worry.

But when Jane got her first check, it was for only $100. She called the adjuster at the insurance company and left a message. After leaving 7 more messages, the adjuster finally called her back and really couldn’t explain to her why she was receiving what she got. They told her they would have to get some documents from her boss and get back to her.

Jane contacted an attorney at Riddle & Brantley who confirmed for her that the $100 she received was incorrect, and that it should be corrected. But Jane was also advised that even $400 might be too low.

IMPORTANT: For a FREE consultation with an experienced North Carolina workers’ compensation lawyer, please call 1-800-525-7111. There are no upfront costs and you won’t pay any attorney fees unless we win your case and you receive workers’ comp benefits. In cases in which a workplace injury results in long-term disability, we also have Social Security disability lawyers ready to help with those claims and appeals, as well. Under the North Carolina Workers’ Compensation Act, if an employee has been on the job for less than a year, he or she can request that “Temporary Total Disability” benefits be based on a “comparable employee.”

Of course, no two employees are the same. But Jane was advised that the Act allowed her to request earning records of other employees with the same job title who had been on the job for at least a year and ask that her benefits be based on the wages of individuals who had been with the company longer than her. That way, her workers’ comp disability checks would take into account the overtime she would have earned in the coming months, and the busy seasons she would have worked if she had not been injured.

She even learned that the calculation provided that holiday and end-of-year bonuses should be applied, and that if the comparable employee went on vacations, those weeks could be removed from the equation, which could bring her compensation rate up even higher.

Let’s Get You the Workers’ Comp Benefits You Deserve

One of our Board-Certified Specialists in Workers’ Compensation will review your claim and advise you on your options for seeking workers’ comp benefits. We can help calculate your workers’ compensation in North Carolina and, if you decide to hire us, fight tirelessly for your right to compensation.

We’re proud of our record securing millions of dollars in compensation for injured NC workers (see disclaimer below), including:

“I am completely satisfied with the result of my [workers’ comp] case.”

Justice Counts for injured North Carolina workers and we would love to help you if we can.