Gene Riddle, founding partner at Riddle & Brantley, will be handling your case with the assistance of our dedicated staff. 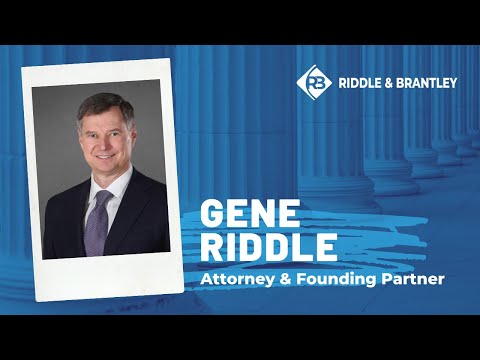 Gene Riddle is a founding member of Riddle & Brantley, a law firm that employs 12 attorneys with more than 220+ years of combined legal experience. Gene is quick to stress his family’s deep North Carolina ties. A Stanly County native, he grew up in Aberdeen after moving from Albemarle. He has practiced law in North Carolina since September 1985.

Gene’s parents were both educators. His father, a longtime superintendent of Moore County Schools, encouraged him to go to law school after college.

“My dad is probably the most honest person that was ever born,” he says. “Honest to a fault. He said we needed more honest lawyers, and I’d be a good one.”

Today, Gene believes honesty, integrity and willingness to work hard are the bedrock principles of a good attorney. That is what he and the other lawyers at Riddle & Brantley provide to their injured clients. Gene spends much of his time reviewing cases as well as instructing and supervising attorneys and paralegals. However, he also continues to directly handle cases as the lead attorney and he touches most of the personal injury cases that come into the firm.

Gene is particularly proud of his firm’s pledge to respond to phone calls and e-mails after hours and on weekends. As a result, he monitors almost all inquiries received.

“The person who answers our phone or gets the e-mail can contact four attorneys who are set up to review the potential client’s inquiry,” he says. “Ninety-five percent of the time, I’ll be the first one to respond.”

Gene takes on cases that involve serious personal injury in car accidents, truck accidents, dog bites, premises liability, wrongful death and violations of Constitutional Rights. In every case, Gene’s objective is obtaining an outcome that his client believes is fair.

“The client’s goals are most important,” he says. “That has to be measured by what’s reasonable and what’s fair. Our guiding star is fairness. We’re about fairness. Justice counts.”

Attorney with a Reputation for Success in State and Federal Courtrooms

Justice usually means compensation for the injured party’s losses, including their pain and suffering. Still, according to Gene, in many cases the acknowledgement of the defendant’s fault or even an apology is also valuable.

In one case, Gene represented a spectator at a high school basketball game who was badly injured when bleachers he was climbing shifted. The client fell through, severely injuring his leg. The man suffered permanent injury to his leg and incurred $2,500 in medical bills. The bleachers were not pulled out properly and stabilized, leading to the accident, Gene says. However, the school system would not admit any negligence, nor would it consider any settlement. This negligence prompted a courtroom battle where Gene prevailed. In Carter v. Wayne County Board of Education, the jury returned a verdict of $250,000 for the plaintiff.

Gene also represented five women in a claim against a Wayne County sheriff’s deputy. These women alleged the deputy had demanded sex in return for favorable treatment for their pending criminal cases. Four of Gene’s clients settled their lawsuits against the Wayne County Sheriff’s Department and the county. One client proceeded to federal court against the deputy, alleging he had violated her Constitutional protection against cruel and unusual punishment. Gene prevailed for his client in the courtroom.

In Fordman v. Braswell, the jury awarded the plaintiff $1.5 million in actual damages and $3.5 million in punitive damages. According to news reports, after the court heard the evidence Gene presented on behalf of the plaintiff, the defense said it would no longer contest the case. Judge Terrence Boyle then dismissed the jury and imposed the judgment.

Goldsboro Wrongful Death Case: “I Believe I Truly Got Justice”

On his desk, Gene keeps a photo of 16-year-old girl, her parents’ only child. The girl died after a tractor-trailer hit her car in an intersection in Goldsboro. The initial investigation of the accident supported the truck driver’s version of the facts. He said he had a green light at the time of the accident. The girl’s devastated parents were not satisfied with the truck driver’s account, so they contacted Riddle & Brantley. Our investigation revealed a different story.

Investigators tracked down eyewitnesses who contradicted the truck driver. Gene then hired accident reconstructionists whose forensic work showed that the truck driver had indeed run a red light. The trucking company’s insurers agreed with the new evidence and settled, paying the grieving parents $840,000. Additionally, the truck driver faced charges for misdemeanor death by motor vehicle. He pled guilty and eventually lost his commercial driver’s license for a year.

“This is a case where I believe I truly got justice,” Gene says.

Gene’s legal accomplishments have earned him several professional honors from his legal peers, including the 2014 Litigator Award. He also has a high AV Rating from Martindale-Hubbell as well as designation among the Best Attorneys of America and the American Trial Lawyers Association’s Top 100 Trial Lawyers. Additionally, he earned membership in the Million Dollar and Multi-Million Dollar Advocates Forums, based on verdicts won and settlements reached.

However, the award Gene treasures most is the Old North State Award, which he received in 2009. The Old North State Award is presented by the North Carolina governor to individuals who have provided exemplary service and commitment to the state. Gene received it for his community service as a member and chairman of the Wayne County Board of Elections over four years.

“I was very proud of that (Old North State) award because it’s just one step under my Dad,” Gene says, “which is probably appropriate, because that’s my Dad.”

Gene and his wife have two daughters and several pets, including a Westie named “Coconut” who has been featured in several TV commercials. Church activities are also an important part of their lives. In his free time, Gene enjoys several sports, including tennis, golf and skiing.