Paraquat Exposure: Are You At Risk?

What are the consequences of Paraquat exposure, and who may be exposed? Paraquat, an herbicide (weed killer) that has been widely used in applications from home gardening to commercial agriculture, has recently been linked to an increased risk of Parkinson’s disease from regular exposure to Paraquat. In this article, we’ll break down the consequence of Paraquat exposure as well as who is at the highest risk of exposure and its subsequent health risks.

IMPORTANT: If you have been exposed to Paraquat and later developed Parkinson’s disease, you may be entitled to a lawsuit. Call 1-800-525-7111 today to speak with one of our Paraquat lawsuit lawyers for a FREE consultation to see if you qualify for a Parquat claim.

Paraquat is a popular weed killer that has been in use globally since 1961. Favored as a “safer” alternative to known carcinogenic weed killers like Roundup, it is found in everything from topiary gardens to commercial produce farms. However, the “safer” label is misguided. Numerous studies have linked Paraquat to Parkinson’s disease. Despite this, Paraquat is still allowed in the United States as a “restricted use” chemical.

Paraquat is found in any of these common brand name weed killers:

For a complete list of Paraquat-containing weed killers, visit our supplementary page.

Many studies have drawn a link between Paraquat exposure and neurodegenerative diseases, including Parkinson’s disease.

A study by the University of Guelph found that “low-level exposure to the pesticide (paraquat)… disrupts cells in a way that mimics the effects of mutations known to cause Parkinson’s disease.”

Who is at Risk of Exposure to Paraquat?

According to the American Parkinson Disease Association, people who were exposed to a rural environment at an early age are at highest risk.

Regular exposure to Paraquat can put many people at risk for serious complications and illnesses. Those most at risk include but are not limited to:

NOTE: If you’re unsure if you’ve been exposed to Paraquat, keep in mind:

These are not the only people at risk, however. Anyone who lives near properties that use paraquat for weed control may be at risk for exposure due to phenomena such as “pesticide drift.” This is where during application, the herbicides or pesticides are carried through the air and end up in areas where they were not intended to be applied.

This can occur through various methods of application such as hand application, agricultural aircraft (crop dusters), and other farming equipment.

Similar to pesticide drift is pesticide overspray, which can expose people to pesticides like paraquat due to operational error when distributing the pesticide. For example, if a crop dusting aircraft does not cut its supply line in time and spreads pesticide on a residential area instead of an agricultural area.

There are many trade names for Paraquat and many manufacturers, including Syngenta and Chevron, which are the subject of many lawsuits.

How Does Exposure to Paraquat Work?

According to the CDC, there are several methods by which someone can be exposed to Paraquat and suffer adverse health effects such as poisoning and long-term health problems. 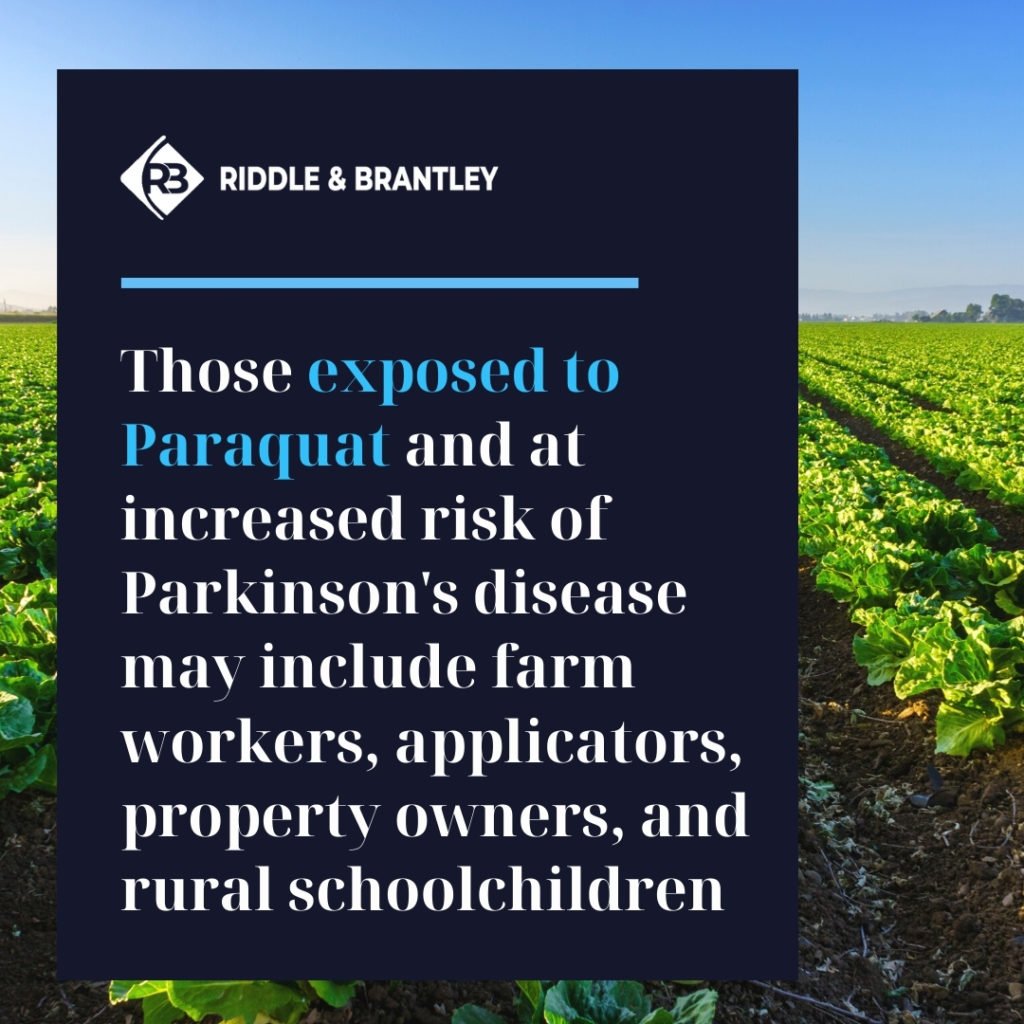 These, however, are only the short-term effects. Long-term exposure, as mentioned earlier, can potentially cause neurodegenerative diseases such as Parkinson’s disease.

If you or a loved one may have been exposed to Paraquat and later developed Parkinson’s disease, call 1-800-525-7111 for a FREE review of your case to see if you may qualify for a Paraquat lawsuit.

How Do I Qualify for a Paraquat Lawsuit?

If you believe you have been exposed to Paraquat and later developed Parkinson’s disease, you may be entitled to Paraquat compensation.

At Riddle & Brantley, our injury attorneys over 220+ years of experience fighting for the rights of our clients who have been exposed to dangerous chemicals like Paraquat due to potential manufacturer or operator negligence. Since 2000 alone, we’ve recovered more than $600 million for our deserving clients (see disclaimer below).

You deserve to have a team fighting for your rights and ensuring you receive the justice you deserve.

Call 1-800-525-7111 for a FREE consultation with one of our experienced Paraquat lawyers to see if you may qualify for a Paraquat lawsuit.