There’s been a lot of media buzz around potential health risks associated with giving bovine-based (cow’s milk) formula to infants, especially preterm infants. Baby formula lawsuits have even been filed against major formula distributors, alleging they did not adequately warn the public about potential risk of necrotizing enterocolitis (NEC) associated with these formulas. 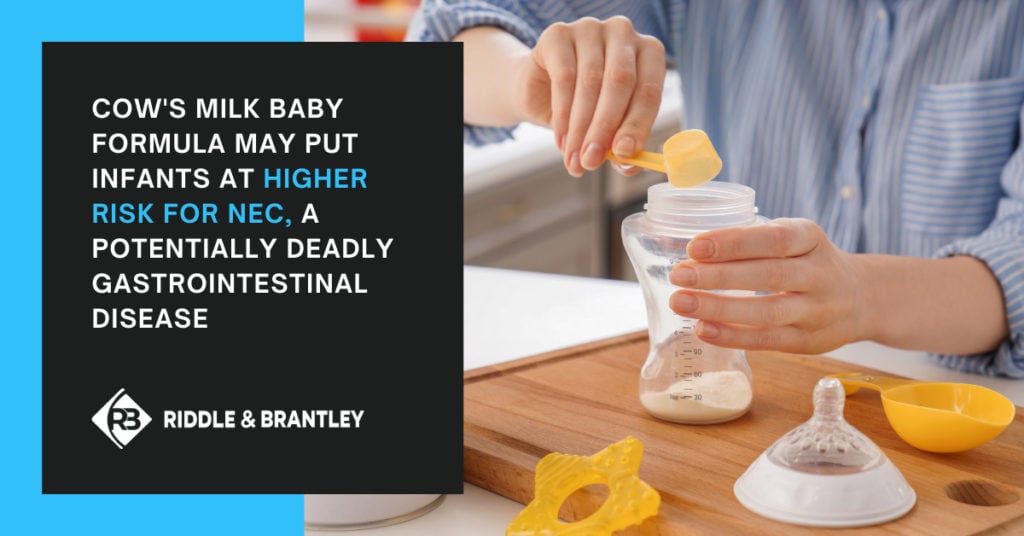 So, is cow’s milk baby formula bad for babies? These baby formulas have been linked to potentially increased risk of NEC (necrotizing enterocolitis), a potentially deadly gastrointestinal disease. Other babies may have allergies to these formulas that put them at risk of other health problems. We’ll explore some of the research surrounding these bovine-based formulas so you can better understand what you’re feeding your infants.

Symptoms of a milk allergy may include:

If your infant is experiencing any of these symptoms, you should contact your pediatrician immediately. There is also a more serious health risk potentially associated with cow’s milk formulas that parents and doctors need to be aware of — necrotizing enterocolitis (NEC).

NEC (necrotizing enterocolitis) is a dangerous and potentially fatal gastrointestinal disease. NEC has been linked to bovine-based formula feeding, and premature infants fed with cow’s milk-based baby formula may be at significantly higher risk.

According to Stanford Children’s Health, when an infant has NEC, “tissue in the large intestine (colon) gets inflamed. This inflammation damages and kills some tissue in [the] baby’s colon.” Left untreated or in more severe cases, the inflammation can cause ruptures in the intestine. This allows bacteria to leak into the intestinal wall or abdomen, causing pain, infections, and sometimes death.

A study published in The Lancet in the 1990s found that infants who were fed bovine-based (cow’s milk) formulas were up to ten times more likely to develop NEC than infants who were breastfed.

This was supported by subsequent studies by the National Institute of Health, the Journal of Pediatric Research, and the British Medical Journal.

All these studies found that there was a clear link between a higher risk for NEC in infants who were fed bovine-based formulas over those who were breastfed. This has led to several consumers filing NEC lawsuits against popular manufacturers for not disclosing these risks.

IMPORTANT: Cow’s milk-based baby formula may be bad for infants as it may increase the risk of necrotizing enterocolitis (NEC), especially in premature infants. If your infant has developed NEC after feeding with baby formula, call 1-800-525-7111 for a FREE, no-obligation consultation. You and your family deserve justice and you may be entitled to significant compensation in a baby formula NEC lawsuit.

With so much research indicating a higher risk for NEC caused by cow’s milk-based formulas as well as a relatively high risk for allergies, it seems reasonable to assume that formula manufacturers would be sure to make consumers aware of the potential risks associated with these products.

However, recent baby formula lawsuits allege that formula manufacturers and distributors ignored and/or deliberately downplayed the potential NEC risk associated with their products, despite having access to research confirming the high risks for preterm infants.

Manufacturers are being questioned about not only why consumers were not educated about the potential risks associated with cow’s milk formulas, but also why they have been slow to adopt safer alternatives that are already available. These alternative formulas carry less risk than cow’s milk formulas and provide the same nutritional value.