Sexual Assault in North Carolina: More Common Than You Think

Epstein, who avoided federal charges in a previous investigation, pled guilty in a related case in Florida in 2007 and received what many legal analysts consider an extraordinarily light sentence.

The indictment of Epstein and the related #MeToo movement have shined a light on the prevalence of sexual assault and coercion in the United States, and sexual assault in North Carolina is no exception.

Sexual assault, rape and sex coercion in North Carolina are tragically all too common. 2,035 rapes were reported in North Carolina in 2017 alone, and according to the Rape, Abuse and Incest National Network (RAINN), more than 75% of sexual assaults are not reported to police.

Sexual assault is extremely traumatic and the consequences can be lifelong and devastating.

In North Carolina, victims of sexual assault and coerced sexual activity have options to seek justice for their suffering. 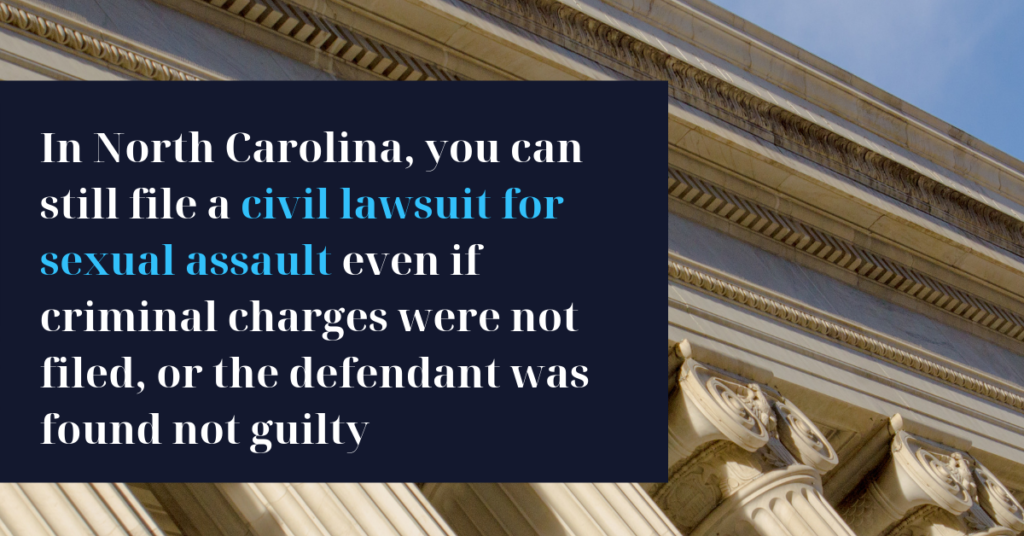 Sexual assault victims can file a civil lawsuit against anyone allegedly liable for the sexual assault, regardless of whether or not criminal charges are filed.

Civil cases carry a lower burden of proof, which means that victims may be able to win a civil lawsuit even when the alleged perpetrator was found not guilty in a criminal case, or sexual assault charges were not filed at all.

Compensation in a civil case can be used to pay for medical treatment as well as mental health treatment and counseling associated with the sexual assault. Financial compensation can also help make up for wages lost as a result of the incident. Punitive damages may also be imposed on the offending party.

North Carolina Statutes of Limitations for Rape and Sexual Assault

In North Carolina, there is no criminal statute of limitations for rape or sexual assault, meaning that criminal charges may be filed no matter how much time has passed since the alleged incident. This applies to work place, clergy, Boy Scout sexual assault as well as all other forms.

Riddle & Brantley has been representing North Carolina victims of sexual assault for decades, and our attorneys have more than 220+ years of combined experience practicing civil law.

“Everyone is entitled to equal protection under the law, and everyone deserves justice. No one should ever be a victim.” -Gene Riddle

While many sexual assault victims feel discouraged from filing a civil lawsuit due to financial reasons, it’s important to know that Riddle & Brantley does not charge any attorney fees unless financial compensation is offered or awarded.

Are you the victim of sexual assault? If you have been sexually assaulted, you deserve justice and you may be entitled to compensation.

Our North Carolina sexual assault lawyers may be able to help. For a FREE and 100% confidential consultation, please call 1-800-525-7111 or complete the form below.

If you have a case and decide to hire us, there is no upfront cost and no attorney fee unless we recover financial compensation for you.

We would love to help if we can.