Home » Blog » What Are the Chances of Winning a Social Security Disability Appeal?

What Are the Chances of Winning a Social Security Disability Appeal?

What are the chances of winning a Social Security Disability appeal?

Before getting into those numbers, be aware that the question of what factors the Social Security Administration (“SSA”) uses to determine whether your particular claim will be approved or denied is not addressed in this post. For more information on that, check this out.

This post talks ONLY about your statistical odds of receiving benefits.

By way of background, recent SSA statistics show that just over 2 million claims for disabled worker benefits were filed in 2019.

These claims can be made under two provisions of the law:

In other words, 2 million Americans made claims for disability benefits in a year.

So, of those 2 million claims, what are the odds that each of them will eventually be approved? 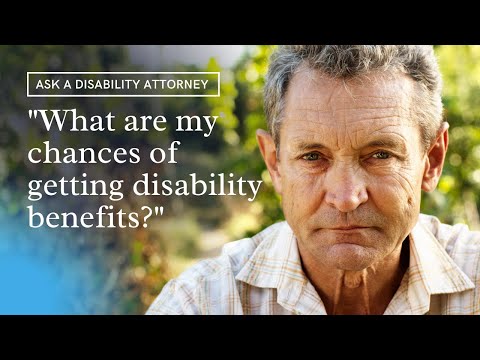 At the first (called “Initial Application”) level, only about 30 percent of all claims are approved.

Those that are approved are usually for claimants who meet a “Listing” (check out the SSA’s “Listing of Impairments”) or who are so clearly and obviously disabled (for instance, those in a coma or rendered quadriplegics from accidents) that there is no question they cannot work.

This leaves roughly 70 percent of the original 2 million (or about 1.4 million) claims rejected at the Initial Application level.

Chances of Social Security Disability Approval at the “Reconsideration” Level

The next step in the SSA’s process is called “Reconsideration.”

At this step, a different Claim Examiner at the state’s Disability Determination Services (“DDS”) office reviews the work of the Examiner who reviewed the case at the Initial Application stage to see if anything was missed or of if the decision should be changed for other reasons.

On average, the chance of approval at the Reconsideration level is only 13 percent.

This means that only in 13 percent of the cases that are originally denied, DDS reverses the denial into an approval. The rest are denied a second time.

It is very frustrating for claimants at the Reconsideration stage because they have very little control over the time it takes to get through this stage (generally several months) or the result.  Other than attending any doctor examinations or other appointments the SSA asks you to attend and making sure DDS has all your medical records, the Reconsideration stage simply involves waiting.

Chances of Social Security Disability Approval at the “Hearing” Level If your case is denied at the Reconsideration level, the next step is to request a hearing before an Administrative Law Judge (“ALJ”). At this level (known as the “Hearing Level”), the odds of success go up significantly.

Nationally, about 47 percent of all cases at the Hearing Level are won by claimants.

This leaves over half of the claimants who asked for a hearing before an ALJ without benefits.

Some of these claimants believe the ALJ did not decide their case properly or fairly. Many of them appeal their ALJ denial up to the next level – the Appeals Council.

This Council is comprised of a number of Administrative Appeals Judges (“AAJ”) and staff whose job it is to review decisions of the ALJ’s to see if any mistakes were made. However, the odds that they will do that are low. Even though the Appeals Council has the power to reverse a denial by an ALJ, they rarely do this (statistically, only about 1 percent of the time).

So, essentially 90 percent of the time, the Appeals Council approves the ALJ’s denial of benefits.

If a claim falls into that 90% of cases reviewed but denied by the Appeals Council, the next step in the process is to file a lawsuit in the United States District Court (“Federal Court”) for your geographical area.

The Federal Court only reverses ALJ decisions and grants benefits about 2 percent of the time.

However, just under half of the time they find errors in the ALJ’s decision and remand it back to the ALJ to correct errors. So, your odds of success in Federal Court are significantly better than they are at the Appeals Council level.

Finally, three other factors relating to your odds of success:

These are just three more reasons you should hire an experienced Social Security Disability attorney to help you with your claim for benefits.

We know when and how to ask for these special requests.

If you suffer from a disability and are unable to work, you may qualify for Social Security disability benefits, and an experienced North Carolina disability lawyer may be able to help.

The disability team at Riddle & Brantley is led by a Board-Certified Specialist in Social Security Disability law, with more than three decades of experience fighting for North Carolinians with disabilities.

We believe Justice Counts and would love to help you if we can.

Please call 1-800-525-7111 for a FREE consultation with an experienced North Carolina disability lawyer.

There are no upfront costs and no attorney fees unless we win your claim or appeal and you receive disability benefits.

The consultation is free and there is no obligation. We only get paid if we win your case and you receive the benefits you need and deserve.