We will help you evaluate your options for free, and you will not have to pay any attorney fees unless we win your case.

With an office just down the road from Camp Lejeune, our firm has close ties to the area and many of our attorneys and staff have family members serving in the military. We are proud to assist veterans, their families, and civilian workers with Camp Lejeune colon cancer claims, as well as related claims involving other conditions.

Because of the Camp Lejeune Justice Act, passed by the Senate on August 2, 2022 as part of the PACT Act, victims of the contaminated water will be able to file new claims directly against the federal government. The military has denied these claims previously, but thanks to this new legislation, those who have been hurt can now pursue the justice they deserve.

The Connection Between Camp Lejeune Water Contamination and Colorectal Cancer

Camp Lejeune has a well-documented history of water contamination. From 1953 through 1985, Camp Lejeune’s water was polluted with dangerous chemicals, which military personnel, their families, and civilian workers consumed or were exposed to in other ways. The Department of Veterans Affairs (VA) says that harmful substances such as benzene, industrial solvents, and other carcinogens have been detected in the water at Camp Lejune.

Additional independent research has confirmed the existence of cancer-causing contaminants in Camp Lejeune water. The Agency for Toxic Substances and Disease Registry (ATSDR) found that trichloroethylene (TCE) was present in concentrations of 1400 parts per billion (ppb), while the current limit is 5 ppb.

In some areas, water contamination at Camp Lejeune may have been present at 240 to 3400 times the acceptable limits. 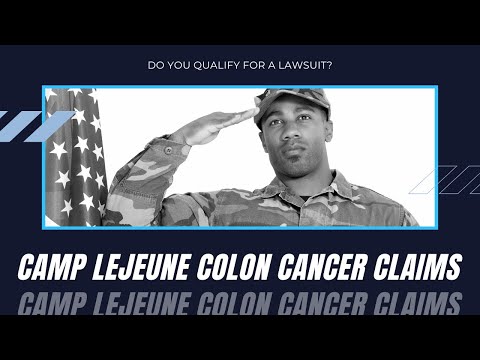 Research indicates that certain types of cancer (including rectal cancer) and other health problems may be linked to chemicals in improperly treated industrial waste, such as that found at Camp Lejeune. For example, between 1953 and 1987, trichloroethylene (TCE), perchloroethylene (PCE), vinyl chloride, benzene, and other chemicals were present in the water at Camp Lejeune, North Carolina, leading many former service members to allege that their conditions were related.

A growing amount of scientific research connects the contaminants found at US Marine Corps Base Camp Lejeune with an increased risk for rectal cancer, strengthening the claims of these injured service members. We anticipate that as claims related to colorectal cancer potentially caused by contaminated water at Camp Lejeune increase, more research will emerge examining the link between these contaminants and colon cancer.

Trichloroethylene (TCE) is a toxic solvent used primarily as an industrial degreaser and a dry cleaning agent. TCE exposure has been linked to many health problems, including cancer — one of which may be rectal cancer.

It is thought that TCE exposure may cause colorectal cancer by damaging DNA in the colon. Although there is some evidence that supports this theory, more research is needed to confirm this hypothesis. However, the CDC recently listed rectal cancer as one of the possible cancers caused by TCE exposure such as that which occurred at Camp Lejeune between 1953 and 1987. It is also possible that TCE exposure may cause other types of cancer, such as bladder and liver cancer. Perchloroethylene is a volatile solvent that has been used in industrial applications for decades to clean electrical equipment and manufacturing parts. Perchloroethylene exposure has been linked with several types of cancer, including rectal cancer — especially among those with the highest exposure.

A study published in the Cancer Causes & Control Journal in 1995 found that PCE exposure in commercial dry cleaning operations increased the risk of several cancers in workers. While they did not specifically control for rectal cancer, this study displays the carcinogenic effects of this chemical.

Benzene is a clear, colorless liquid used as a solvent in many products, including paint and gasoline. Benzene can also be found in various foods and is produced by the breakdown of crude oil. Despite its widespread use, there is evidence that benzene may be responsible for some types of cancer, including rectal cancer.

A study published in Cancer Epidemiol in August 2018 looked at occupational exposure to benzene and the risk of colorectal cancer in four different Nordic countries. The study ultimately “showed an association between workplace benzene exposure and colorectal cancer. The risk was restricted to ascending and transversal colon and was the strongest among women.”

Vinyl chloride is a chemical found in vinyl products, such as PVC pipes and synthetic rubber. It’s also used as a solvent in dry cleaning and paint stripping. This dangerous chemical was also present in the contaminated water at Camp Lejeune.

Like other chlorinated solvents, it’s a known carcinogen. It’s been shown to cause liver, kidney, and lung cancer in animals exposed to it over long periods. Vinyl chloride is also linked to other health problems, including ADHD, reproductive issues, and congenital disabilities.

How to File a Camp Lejuene Rectal Cancer Claim or Lawsuit

Victims of this chemical exposure at Camp Lejeune will be able to bring colorectal cancer claims forward due to the Camp Lejeune Justice Act, passed as part of the PACT Act on August 2, 2022. The Navy previously denied all claims related to the health effects of the water contamination, but this law now enables affected service members to seek retribution for injuries they may have suffered as a result of the contamination.

Riddle & Brantley can help you determine the best legal course of action, evaluate your Camp Lejeune rectal cancer claim, and file a lawsuit on your behalf if you choose to employ us. A Camp Lejeune rectal cancer lawsuit (or claim for another injury) may be filed at no cost to you at 1-800-525-7111. Please call us for a free, no-obligation consultation if you need help. Riddle & Brantley can help you determine the best legal options for seeking compensation if you were diagnosed with rectal cancer after being exposed to contaminated water at Camp Lejeune. For free legal advice and assistance, contact us at 1-800-525-7111 or by filling out the short form below.

Riddle & Brantley has secured over $665 million in compensation for our valued clients since 2000 alone (see disclaimer below). We are ready and willing to help at a moment’s notice, and are proud of the words our clients use to describe their experience working with our experienced trial attorneys:

Our Camp Lejeune rectal cancer lawyers have also been recognized by many prestigious memberships and awards (see disclaimer below), including:

For a FREE consultation with an experienced Camp Lejeune lawsuit attorney concerning a potential rectal cancer claim, please call 1-800-525-7111 or complete the fast and convenient form below.

There is never any obligation, and you won’t pay any attorney fees unless you receive compensation. So call 1-800-525-7111 today, and let’s see how we can help.

Justice Counts for those who served our country and their families, as well as civilian workers who lived and worked at Camp Lejeune, and we are ready to help however we can.