Chris Brantley thrives on the creativity it takes to resolve complex workers compensation claims. He gets satisfaction from helping clients who need a hard-working lawyer to protect their rights after a work injury.

In addition to workers compensation claims, Chris also takes other personal injury cases and has garnered numerous awards and accolades for his achievements. He has earned admission into the prestigious Million Dollar Advocates Forums­– an honor awarded to less than one percent of personal injury lawyers in the United States. He also gained recognition by the American Association for Justice (AAJ) as a “Top 100” trial lawyer.

A Goldsboro native, Chris intended to pursue an art degree at East Carolina University before changing his major to English with a concentration in writing. He then went on to earn his juris doctorate from Campbell University’s Norman Adrian Wiggins School of Law in 1993.

Chris continues to hone his skills and knowledge of the law. In 2000, he became a North Carolina State Bar Certified Specialist in Workers Compensation, a distinction few achieve. Additionally, he was admitted to practice in the Eastern District of the United States Federal Court in October 2012.

After 23 years as a practicing lawyer, Chris understands the complexities of workers compensation law. “The rules of workers compensation are so convoluted,” he says. “It’s all about statutes and forms, and there’s so much red tape.… Sometimes it just depends on where the medicine lies, what the doctors say. You can turn the evidence into a winning case and you can help an injured employee who really needs benefits to take care of his or her family.”

Chris says a workers comp case often pits an injured employee against his or her employer’s insurance company. The North Carolina Industrial Commission administers the state’s workers compensation program and hears these cases. However, insurance companies are often formidable and intimidating.

Insurers for employers have a job to do, which is to pay as little as possible, according to Chris. Worse, they have a distinct advantage over the average employee.

“Almost all the insurance companies either have lawyers privately retained or have carriers with as much knowledge and experience as a good experienced workers comp lawyer,” he says. “So you’re pretty much fighting with one hand behind your back if you don’t have your own lawyer. To me, it would almost be like trying to practice medicine on yourself.”

Chris examines every part of a workers compensation claim to create a solid case that results in a proper outcome. “We’ve got investigators, if necessary, who can go out and take photographs, interview witnesses, track down OSHA reports, medical records, any kind of public records,” he says. “We do background checks on the defendant sometimes.”

“Generally, your corporate executives don’t get hurt on the job,” Chris says. “It’s usually people who bust their knuckles for a living, and they’re hard working people. The most gratifying part of my work is being able to help somebody who’s up against a really powerful adversary.”

He and the rest of the legal team at Riddle & Brantley are all passionately committed to helping their clients, he says. “We’ve got some really great lawyers,” Chris continues. “We’ve got a great leadership with Gene Riddle. He’s really done a phenomenal job helping manage the firm and drive our growth.”

Many workers who have been injured and come to Riddle & Brantley for help are encountering the workers compensation system for the first time. However, Chris says he has seen enough cases that he knows the approaches both sides will take.

He handled the case of a truck driver in his 40s who died in a single-vehicle accident and whose wife was denied worker comp benefits. The medical examiner said the trucker had severe atherosclerosis (hardening and narrowing of the arteries) which led to a heart attack. According to the medical examiner, this was the cause of death, not the workplace accident. However, Chris had a cardiologist review the file. The cardiologist then testified that it was just as likely that the on-the-job accident caused the fatal heart attack.

That testimony proved vital and led to a reversal of the decision. “The claim had been completely denied and a penniless widow had been left without any benefits. But we were able to win the case,” Chris says. “It’s gratifying to be able to make a difference in a person’s life, as well as to represent an individual who truly needs legal help.”

Chris and his wife have two daughters. When not working on a case, Chris enjoys playing guitar, working out, and participating in various sports. 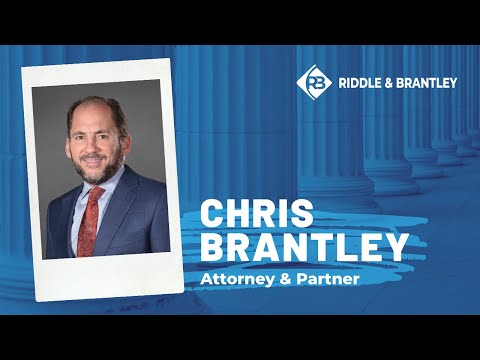