Does Paraquat Cause Essential Tremors?

Parkinson’s Disease is often misdiagnosed. It can take a person several visits to their general practitioner before they are ever referred to a neurologist or movement disorder specialist for an accurate diagnosis. Several other conditions, including essential tremor disorder, mimic Parkinson’s, making the rate of misdiagnosis higher than other diseases.

At Riddle & Brantley, our lawyers are currently accepting cases regarding possible Paraquat-related Parkinson’s disease. Studies show that exposure to the dangerous herbicide may substantially increase a person’s risk of developing Parkinson’s disease. Unfortunately, many people with Parkinson’s have not received a proper diagnosis.

If you were exposed to the paraquat and have symptoms similar to Parkinson’s disease, contact our office at 1-800-525-7111 for a FREE, no-obligation consultation.

IMPORTANT: As with any medical issue, consult with your physician if you are experiencing symptoms or have questions about your health.

What Is Essential Tremor Disorder?

Essential tremor (ET) is a common nerve disorder that can cause uncontrollable shaking in parts of your body. The neurological disease affects people of all ages but is generally seen in older individuals. It can cause involuntary trembling in almost any part of your body.

Areas of the body most often affected by essential tremor include:

It is believed that essential tremor is passed down from parent to child, making genetics the primary factor in determining whether you will develop the disorder. Because individuals with Parkinson’s disease are often misdiagnosed with essential tremor, it is strongly recommended that you seek more than one opinion after a diagnosis.

How Are Essential Tremor and Parkinson’s Different?

Despite being very similar, essential tremor disorder and Parkinson’s disease are very different. A neurologist or other specialist should be able to discern between the two and give an accurate diagnosis.

If you have more than one symptom of Parkinson’s but have been told you have essential tremor, you may have been misdiagnosed. It is vital to seek a second opinion to confirm the diagnosis.

How Often is Parkinson’s Disease Misdiagnosed?

According to the American Journal of Managed Care (AJMC), 26% of people with Parkinson’s disease were misdiagnosed. An additional 21% had to see their general provider multiple times before receiving a referral to a specialist.

Another study suggests that Parkinson’s is misdiagnosed up to 30% of the time. The best way to ensure a proper diagnosis is by seeing a neurologist. Parkinson’s can present in a number of ways, and few patients exhibit the same symptoms in the same way, making it difficult to get an accurate diagnosis.

Is Paraquat Linked to Essential Tremor? 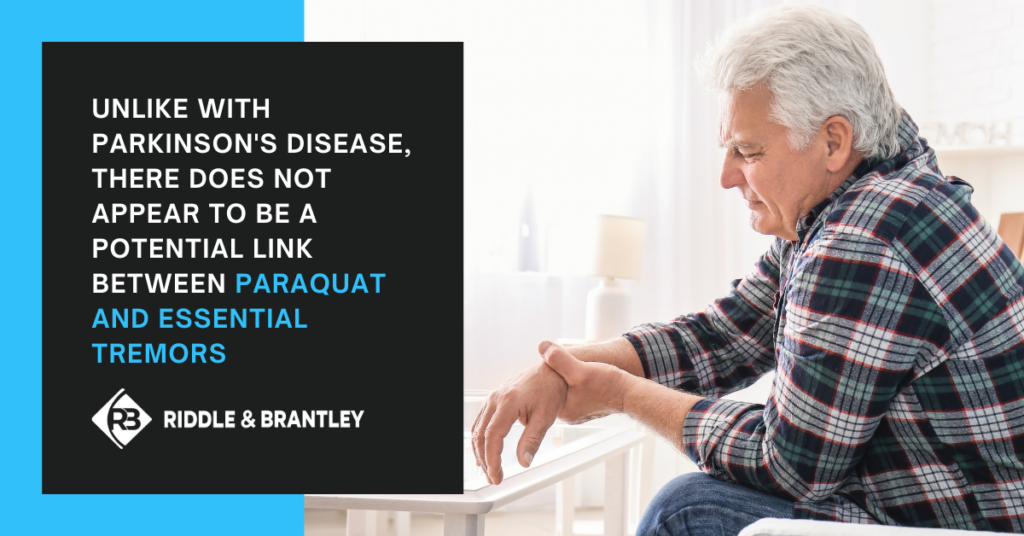 Scientists believe that essential tremor is primarily inherited. As discussed by the Mayo Clinic, a person who has a parent with a genetic mutation for essential tremor has a 50% chance of developing the disorder. Essential tremor, therefore, is more likely to be caused by genetic factors as opposed to exposure to chemicals or other hazards.

A solid genetic link has not been established with Parkinson’s disease. While, in some cases, a genetic mutation may be a factor in whether a person develops the chronic disease, it is believed that environmental factors play a more significant role. Several studies indicate that exposure to herbicides like Paraquat may increase the risk of developing the disease.

Our Paraquat lawyers can help determine whether you are eligible for compensation if you were exposed to the weed killer and developed Parkinson’s disease or related symptoms.

What to Do If You Were Misdiagnosed with Essential Tremor

If you were exposed to the herbicide Paraquat and are experiencing symptoms related to Parkinson’s disease, you need an accurate diagnosis. It is important to consult with a movement disorder specialist or neurologist as soon as possible.

At Riddle & Brantley, we can help determine if you would qualify for a lawsuit based on your Paraquat exposure. Paraquat is still being used throughout the United States, putting millions of people at risk. Contact our office today at 1-800-525-7111 if you are a licensed applicator or were inadvertently exposed to the potentially hazardous substance.