Many potentially affected by police misconduct ask, “What are the common types of police brutality?” 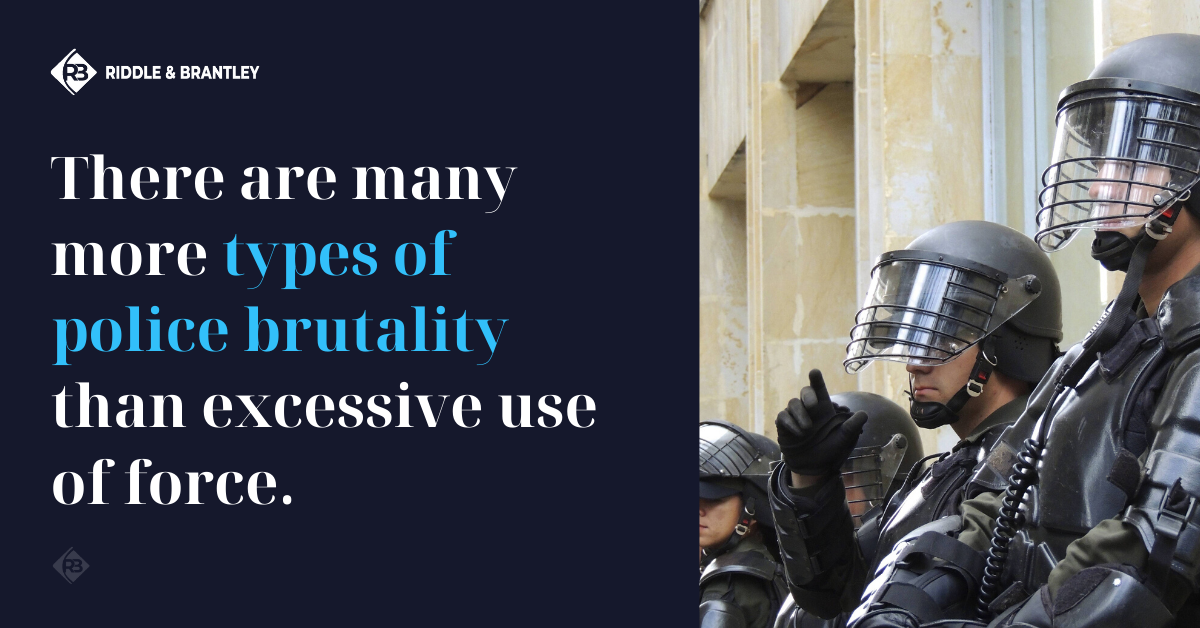 According to The Washington Post, as of June 2020, 1,033 people have been shot and killed by police. This database was created using public records, news reports, social media as well as other sources. It is difficult to estimate and track these reports because of the lack of government records and tracking systems.

However, not all types of police brutality involve violence.

Use of Excessive Force by Police

Police brutality often refers to excessive use of force by law enforcement officers. Excessive force is clearly the most common type of police brutality. Many times, police need to use physical force to apprehend armed suspects and criminals with a history of violence. Officers are permitted to use necessary and reasonable force that a reasonable officer would use under the same or similar circumstances. Once the justification for use of force subsides then the officer should relax his use of force. However, sometimes police cross the line, using more force than necessary when arresting a person. This may be considered a type of police brutality.

Excessive force may include but is not limited to:

These types of police brutality may lead to serious injury or death. In particular, police are supposed to use firearms (which is considered deadly force) as a last resort.

However, in some situations law enforcement may not need the valid warrant to search you or your belongings.

For example, police can search your house without a warrant if you have been arrested lawfully for a crime or the officer has probable cause to believe you committed a crime. A search warrant may entitle law enforcement to enter your home without your permission or in your absence.

No one should endure unlawful treatment from any law enforcement officer, especially if it is racially motivated. Law enforcement agencies are supposed to protect all U.S. citizens regardless of their race.

According to a study conducted by Stanford researchers, police are more likely to search African-American and Hispanic motorists compared to Whites and Asians.

Racial discrimination can be considered a type of police brutality, especially in instances where other violations are involved (such as excessive use of force or false arrest).

One of the other types of police brutality is false arrest, or wrongful imprisonment.

False arrest occurs when law enforcement officers take someone into custody without an arrest warrant or probable cause. Being falsely arrested may violate federal civil rights laws and state common law.

The Fourth Amendment of the United Constitution states that police cannot arrest individuals without a proper arrest warrant issued by a judge. Furthermore, law enforcement agencies can’t detain an individual without probable cause or evidence. The person arrested should be taken before a court or magistrate within a reasonable time.

Failing to do so could lead to a wrongful arrest claim against the arresting officer. A plaintiff is usually entitled to receive compensation for loss of liberty, physical injury and mental suffering caused by false arrest.

One of the most grievous forms of police brutality is sexual assault, or sexual abuse.

Legal action may be taken if a police officer sexually abuses or violates a person placed in custody.

The government does not currently have a system to document these cases, so the extent of this problem is hard to report. However, there are some independent studies showing the problem has become more widespread than it appears. This study shows that approximately 1000 police officers lost their licenses from 2009 to 2014 for various incidents of police brutality involving sexual offenses.

It is vital to understand that if a person is in the custody of the officer, then that suspect is incapable under the law of giving consent to any sexual encounter. At that point, any sexual act with the suspect is a sexual assault.

In certain cases, a person in police custody may require medical attention. In some cases, individuals are denied medical care by police or other law enforcement personnel. This constitutes a type of police brutality. In particular, the denial of medical care to a person in custody by law enforcement may qualify as a violation of the Eighth and Fourteenth Amendments (see below).

What are my rights against types of police brutality under the Constitution?

The Constitution offers many protections against types of police brutality and other forms of law enforcement misconduct. Fourth Amendment — The Fourth Amendment protects a person from “unreasonable” search and seizure. In general, searches and seizures must be cleared in advance by a judge. In instances where a warrant cannot be obtained immediately, an officer may only search an individual or property (including a vehicle) when there is probable cause that a crime has been committed.

Fifth Amendment — The Fifth Amendment to the Constitution protects an individual from making self-incriminating statements. Anyone placed under arrest must be read their “Miranda” rights, which provides for your “right to remain silent.” Other provisions of the Fifth Amendment require that people are afforded “due process” under the law.

If you believe your Constitutional rights have been violated and you have suffered from a type of police brutality, you deserve justice and you may be entitled to financial compensation.

For a FREE consultation with a police brutality lawyer, please call 1-800-525-7111 or complete the fast and easy form below.

Please call 1-800-525-7111 today and let us review your police brutality or misconduct claim in the North Carolina area.

Justice Counts for you and your loved ones if you have suffered from types of police brutality, and we would love to help you get justice and compensation if we can.