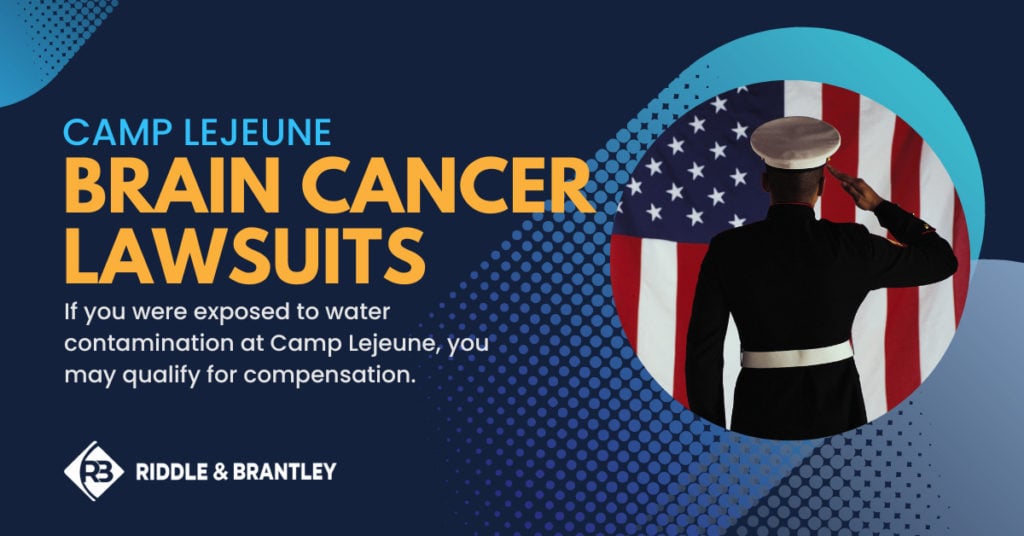 Many service members, family members, and civilian contractors have developed brain cancer or other injuries after living and working at the Marine Corps base, potentially due to contaminated water.

If you’re ready to file a claim, call Riddle & Brantley at 1-800-525-7111 and we will help you evaluate your Camp Lejeune lawsuit or claim options for free. We are actively investigating these claims and would love to assist military veterans in obtaining the justice they deserve.

Because of the recently passed Camp Lejeune Justice Act (part of the broader PACT Act for veterans), victims of the camp that have historically been denied their claims can now pursue the justice they deserve. 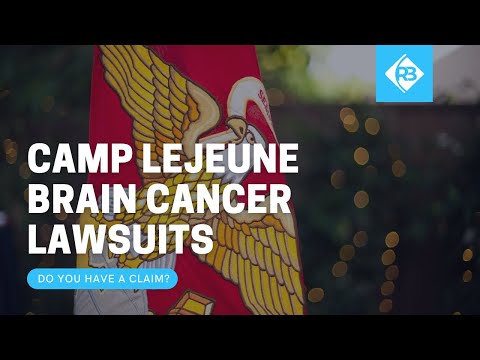 Did Contaminated Water at Camp Lejeune Cause Brain Cancer?

From 1953 through 1985, Camp Lejeune’s water was polluted with dangerous chemicals, which military personnel, their families, and civilian workers subsequently drank or were exposed to. The Department of Veterans Affairs (VA) reports that benzene, industrial solvents, and other carcinogens were present in the water at Camp Lejeune.

As early as the 1970s, residents began to report cases of cancer in the area. In recent years, further studies have shown a link between exposure to contaminated water and an increased risk of certain types of brain cancer. Brain cancer and other health problems may be linked to chemicals in improperly treated industrial waste and industrial byproducts, such as trichloroethylene (TCE), perchloroethylene (PCE), vinyl chloride, and benzene. These dangerous chemicals were present in the water at Camp Lejeune, North Carolina between 1953 and 1987.

Trichloroethylene (TCE) is a commonly used solvent in the dry cleaning industry. It is highly volatile and can be found in air, water, and soil. TCE exposure has been shown to cause a variety of health problems, including liver damage and cancer. In 2013, the International Agency for Research on Cancer classified TCE as a possible human carcinogen. Research suggests that exposure to TCE may increase the risk of brain tumors.

TCE has been linked to childhood and adult brain cancer. In addition, it is a known neurotoxin and has been shown to have adverse effects on the nervous system. While it’s not yet clear exactly how TCE causes cancer, research suggests that it may affect DNA repair pathways in the body, which could lead to the development of tumors.

The EPA is so concerned about the risks associated with TCE that they have released a full risk evaluation on the chemical and are moving to propose bans or strict regulations on the use of TCE in manufacturing in the U.S. as part of its effort to reduce chemical exposures.

PCE is a colorless liquid used in the production of other chemicals. It was first discovered in 1929 and was used widely during World War II to make plastics and explosives. It’s also used in products like paint strippers and degreasers. As a result, it has been found in many different environments including soil, water, air, and buildings. It’s also found in some foods like coffee grounds, vegetables, and fruits.

While studies directly relating brain cancer risk to PCE are ongoing, there is established research on the neurotoxicity of PCE and its long-term effects on the health and function of the brain.

Benzene is a known human carcinogen that can cause brain tumors. It is found in gasoline, paint, detergents, and other sources of air pollution. It can also be found in many foods such as potato chips and hot dogs. High levels of benzene in the body have been linked to an increased risk of developing other soft tissue cancers such as non-Hodgkin’s lymphoma and leukemia.

A 2017 study found a strong link between chlorinated solvents (similar to benzene) and higher instances of gliomas (a type of brain tumor), suggesting that these solvents can effectively raise the risk of brain cancer in those exposed.

Vinyl chloride, a compound used in the manufacture of PVC plastics and adhesives, was phased out of the U.S. in the 1970s after decades of research linked it to cancer. However, prior to 1970, industrial activities around Camp Lejeune led to high levels of vinyl chloride contaminating the water in the area.

In a 2016 study, researchers found that vinyl chloride exposure may increase risk for glioma, a type of brain tumor that is associated with environmental toxins such as chlorinated drinking water or pesticides. The researchers found that vinyl chloride exposure increased glioma risk by 4-5 times when compared to those exposed only to other toxins.

“Can I File a Camp Lejeune Brain Cancer Claim or Lawsuit?”

Victims of contaminated water at Camp Lejeune between 1953 and 1987 are now able to file claims directly against the federal government under provisions in the Camp Lejeune Justice Act, which cleared the Senate in a final vote on August 2, 2022.

Please call us at 1-800-525-7111 for a free, no-obligation consultation to get started on recovering what you’ve lost due to illness or injury.

Brain cancer can be challenging to detect in its early stages. This is because symptoms are often influenced by which part of the brain is affected and its corresponding functions. Not all brain tumors cause symptoms. However, some key signs appear early, such as:

Symptoms that appear later may include:

Brain cancer symptoms can result from the following:

If you experience any of these symptoms, you must see a doctor as soon as possible for a diagnosis. Brain cancer is notoriously difficult to treat, and the earlier it is caught, the better the chances of successful treatment.

There are many different types of brain cancer. However, the following are common steps to diagnose it.

Once brain cancer has been diagnosed, your healthcare professionals will develop a personalized treatment plan for you which will consider the type and stage of your cancer, as well as your overall health and preferences.

Talk with a Camp Lejeune Brain Cancer Lawyer for Free Riddle & Brantley can help you determine the best legal options for seeking compensation if you were diagnosed with brain cancer (or another qualifying condition) after being exposed to contaminated water at Camp Lejeune. For free legal advice and assistance, contact us today at 1-800-525-7111.

We serve clients nationwide and even have offices just down the road from Camp Lejeune in Jacksonville, NC. Many of our attorneys and staff have close family ties to the military, and we are proud to fight for those who have served and sacrificed for us.

Free consultations are available by phone, email, text, or video conference. For clients local to North Carolina, we can even come to you directly. Call 1-800-525-7111 and let’s review your potential Camp Lejeune brain cancer claim.

Results for Our Clients

We’re proud of the settlements and verdicts we’ve won for our clients. Since 2000 alone, we’ve recovered over $665 million for our injured clients since (see disclaimer below). In addition to the compensation we’ve recovered for victims, we’re thrilled that clients consistently describe their experience working with our team in overwhelmingly positive terms:

“You’ll walk in the door as a client but leave as family. They’re the absolute best.”

Our Camp Lejeune brain cancer claim lawyers have also been recognized by many prestigious memberships and awards (see disclaimer below), including:

We are ready to help you with a brain cancer claim associated with the water contamination at Camp Lejeune. Please call 1-800-525-7111 or fill out the simple form below. Get in touch with us today for a free consultation with an experienced Camp Lejeune lawsuit lawyer.

Those who served our country, their families, and civilian military contractors who lived and worked at US Marine Corps Base Camp Lejeune deserve justice, and we are standing by to assist in any way we can.