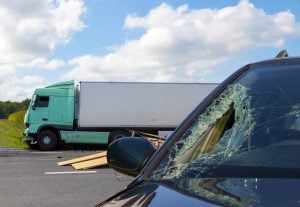 Authorities with the North Carolina State Highway Patrol are investigating a fatal truck accident in Robeson County that occurred on Thursday afternoon. Officials with the Highway Patrol said a semi-truck carrying multiple types of hazardous chemicals crashed into a Mitsubishi passenger vehicle. According to officials, the semi-truck’s driver was travelling eastbound on NC 72 when he veered off the side of the road. In an attempt to avoid crashing, the truck driver overcorrected, which caused him to cross the center line of the highway.

The Mitsubishi’s driver, who was travelling westbound on NC 72, went off the righthand side of road to avoid a colliding with the truck. Despite these efforts, the semi-truck collided with the Mitsubishi and caught on fire. The fire spread to the Mitsubishi.

According to the Highway Patrol, a 1-year-old passenger in the Mitsubishi and the semi-truck’s driver died at the scene of the accident. The driver of the Mitsubishi and a 29-year-old passenger were rushed to McLeod Regional Medical Center in Dillon, South Carolina. Officials said both are now in stable condition. Highway patrol officials are investigating why the semi-truck driver ran off the highway.

Semi-trucks are the most dangerous vehicles on the road. These large trucks can weigh up to 80,000 pounds when they are fully loaded and may be carrying hazardous materials. In some cases, commercial drivers or their employers are responsible for truck crash crashes. Common causes of truck accidents include drowsy driving, poor maintenance practices, speeding, alcohol or drug use and violating federal regulations.

If you or a loved one were injured in a truck accident, then it is crucial to speak to an attorney as soon as possible. The attorneys at Riddle & Brantley, LLP have experience representing truck accident survivors and their families. We also have experience representing truck drivers who were injured by the negligent actions of other parties. Our North Carolina truck accident lawyers could help you determine whether you have options to pursue damages during a free consultation.