In January 2022, a federal jury awarded a $110 million settlement to two U.S. Army veterans who claimed that earplugs manufactured and sold by 3M to the U.S. military were defective and caused significant hearing damage.

The $110 million verdict is the largest in 3M earplug lawsuits to date, with each of the two claimants receiving $15 million in compensatory damages and $40 million in punitive damages. The significance of the damages may set an important precedent for other upcoming 3M earplugs trials and influence potential 3M earplug settlement amounts (no settlements have been agreed to so far).

“We are encouraged by this verdict and are committed to holding 3M accountable for injuries potentially caused by these earplugs. Our veterans deserve justice.”

Before facing the recent slew of lawsuits, 3M settled a whistleblower lawsuit filed under the False Claims Act with the Department of Justice. As a result, 3M had to pay out $9.1 million over an alleged defect in their Combat Arms Earplugs. Service members claim that the defect in the earplugs resulted in insufficient protection against noise during their service, leading to hearing loss. Still, under the settlement terms, 3M did not admit any fault or liability for the defect.

More trials are pending against 3M for this defect, all being brought against them by former service members or their families seeking damages for irreversible hearing loss that they suffered while using the Combat Arms earplugs.

After this most recent loss, 3M stated that the company intends to appeal this decision and that its conduct was in line with a “long-time commitment to keeping our U.S. military safe.”

3M continues to deny liability and/or wrongdoing associated with the defective earplugs allegations, and the company previously filed an appeal with the 11th U.S. Circuit Court of Appeals for another trial loss to separate plaintiffs — three veterans who were awarded $7.1 million in 2021.

In its appeal, 3M stated that the company should not be held responsible for any defect in the product because the military, not them, was ultimately responsible for the design. They also stated that the case “careened off the rails” and that under a legal doctrine commonly known as the “government contractor defense,” they should not be held liable for the product defects and failure-to-warn accusations due to their role as a federal contractor.

The Combat Arms earplugs that 3M manufactured were designed to keep out loud, damaging noise while allowing service members to still hear spoken commands on the battlefield. However, an alleged design flaw in the earplugs can cause them to loosen without the wearer’s knowledge and allow damaging levels of sound into their ears. Over time, this can lead to moderate to severe hearing loss or chronic hearing conditions like tinnitus.

3M denies any liability and/or wrongdoing associated with these earplugs lawsuits, and no settlements have yet been agreed to.

What’s Next for 3M Earplug Lawsuits?

There are five more trials scheduled for this year where claimants will attempt to hold 3M accountable for their alleged negligence and/or wrongdoing related to the 3M Combat Arms earplugs.

Results of previous lawsuits have been mixed, with six trials being decided in favor of the plaintiffs and five being decided in favor of 3M. Therefore, plaintiffs and legal experts will watch the next trials closely to see if these most recent verdicts affect the outcome and potentially influence 3M’s decision-making regarding potential settlements. 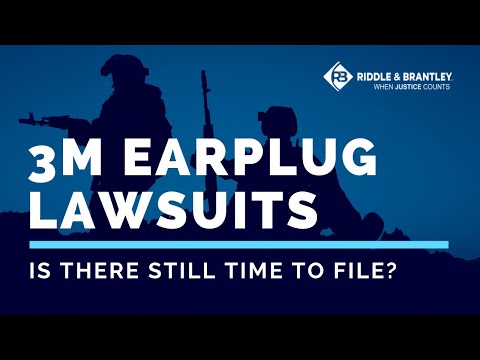 If you’ve been diagnosed with hearing loss or tinnitus after using 3M Combat Arms earplugs while serving on active duty in a combat zone 2003-2015, you may qualify for compensation — and it is not too late to file a claim. Please call 1-800-525-7111 today for a free, no-obligation consultation with an experienced product liability attorney at Riddle & Brantley concerning a potential 3M earplugs lawsuit.

We believe Justice Counts for our veterans and we would love to help you and your family however we can. Please call 1-800-525-7111 and let’s talk.