As of February 2021, 1000 homeowners in Peshtigo, WI have been awarded a $17.5 million settlement to resolve a class action AFFF lawsuit filed in 2018. The class action lawsuit was filed against Tyco Fire Products and two other manufacturers of aqueous film-forming foam (AFFF) when the two lead plaintiffs claimed that their drinking water had become contaminated with per- and polyfluoroalkyl substances (PFAS).

This is the first AFFF settlement and could set a precedent for future firefighting foam lawsuits involving injuries related to PFAS exposure.

Attorney Paul Napoli said this in a release detailing the results of the settlement: 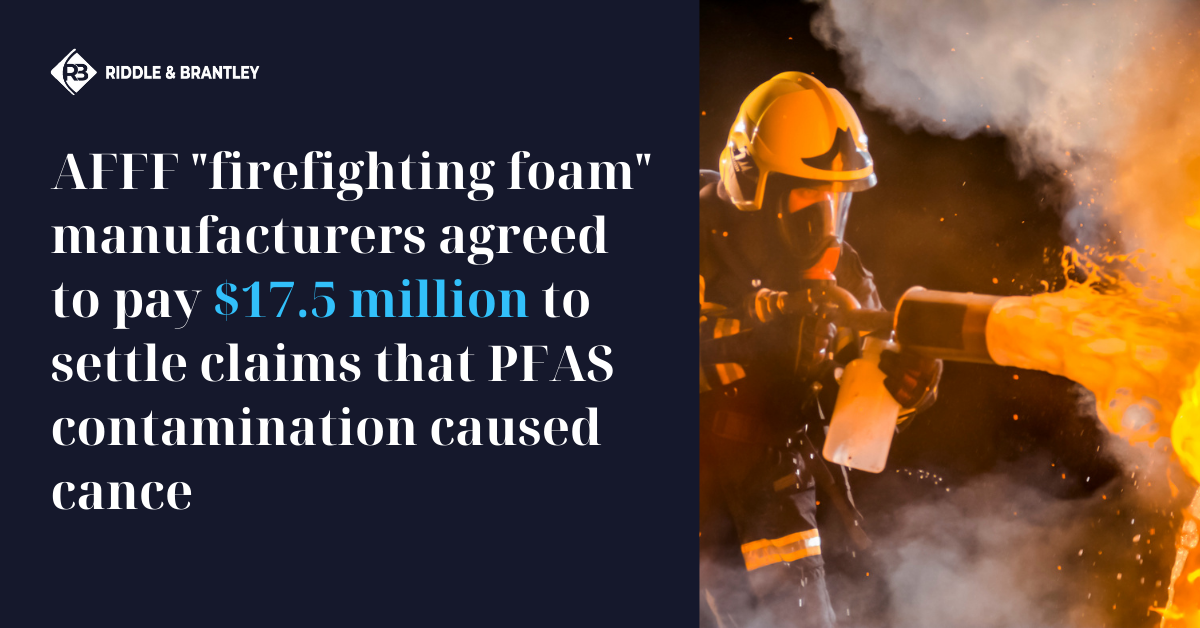 “This settlement marks a significant step in victims’ efforts to secure just compensation for those impacted by PFAS contamination caused by (aqueous film-forming foam), but there is still more work to do as we continue to seek to hold the manufacturers of these chemicals accountable for the harm they’ve inflicted on individuals and the environment.”

While this is the first AFFF settlement, this is not the first settlement involving injuries due to PFAS/PFOA exposure. In 2017, paint manufacturer DuPont and Chemours agreed to settle 3,550 lawsuits related to the release of PFOA for $670.7 million.

PFAS chemicals are commonly known as “forever chemicals,” because once they are introduced to an environment, be it soil or even people’s bodies, they do not break down and last for an extremely long amount of time. In both these cases, local residents found these “forever chemicals” contaminating local water and soil. This is of immediate concern because PFAS has been linked to severe cancers when humans are regularly exposed.

If you’ve been exposed to AFFF “firefighting foam” or contaminated drinking water and suffered from cancer, you may be eligible for an AFFF lawsuit. Call 1-800-525-7111 for a FREE consultation.

Call 1-800-525-7111 and let one of our experienced firefighting foam cancer lawyers review your claim. We would love to help you get the justice you deserve.

AFFF and PFAS Contamination in Firefighters 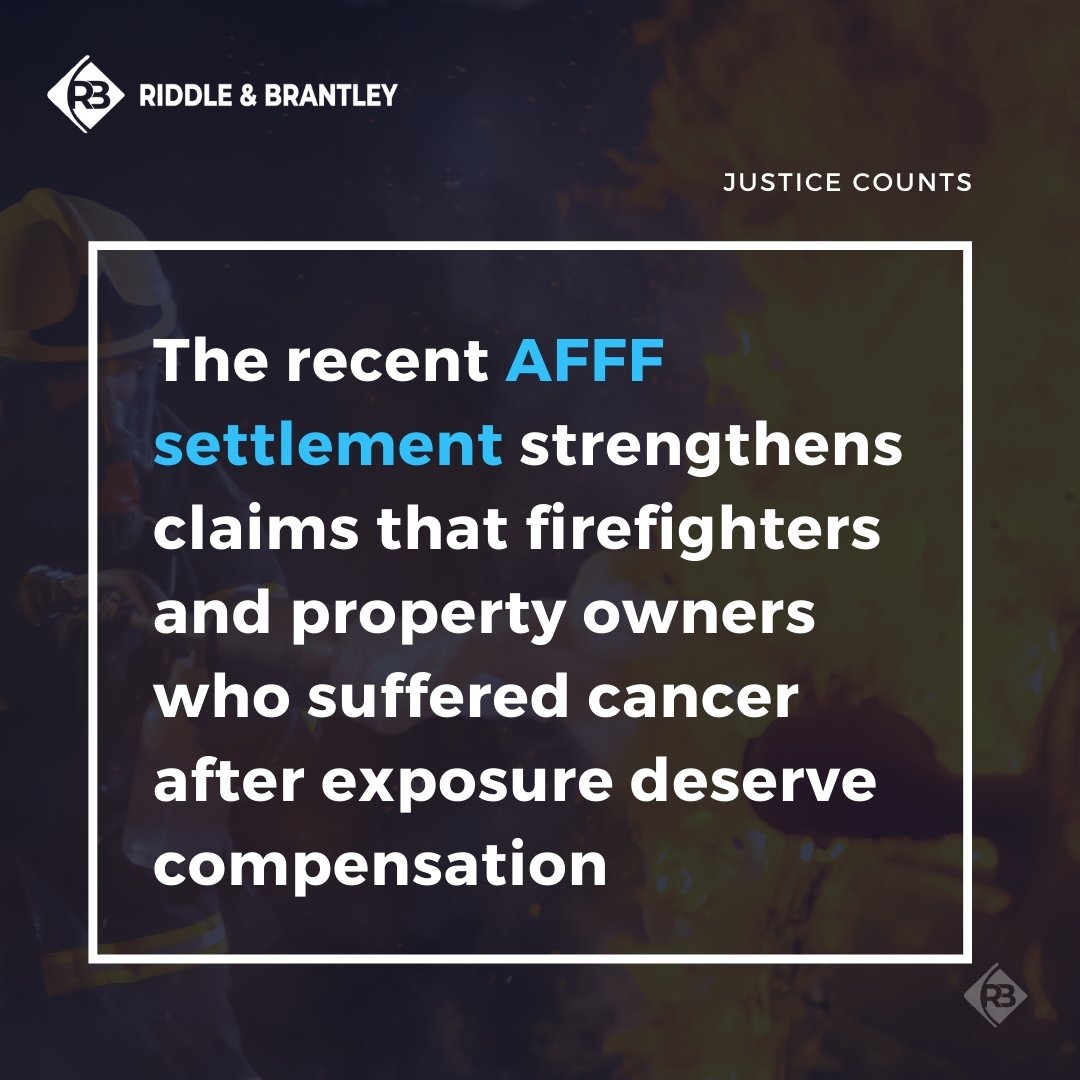 published in 2015 found that firefighters in California had three times higher levels of PFAS concentrations than non-exposed people. This study initially could not draw an immediate link to AFFF, but suggested that “firefighters may have unidentified sources of occupational exposure to perfluorinated chemicals.”

Another study conducted in 2015 by researchers in Australia, however, found elevated levels of PFOS in firefighters exposed to AFFF, indicating a positive correlation between PFOS levels and years of exposure to AFFF.

A variety of studies have linked AFFF and its PFAS chemicals with the development of certain cancers in people who are routinely exposed, such as firefighters.

The EPA has identified PFAS as an “active and ongoing priority” for their agency due to presence of these “hazardous chemicals” in drinking water supplies.

AFFF exposure has been linked to the development of various cancers including:

Firefighters and other professionals who are regularly exposed to AFFF are at the highest risk for developing serious cancers, however property owners’ water supplies may also be affected.

If you have been exposed to AFFF and later developed kidney or testicular cancer, you may qualify for an AFFF cancer lawsuit. Call 1-800-525-7111 for a FREE consultation to see if you qualify.

“What should I do if I believe my cancer was caused by AFFF?” The CDC, EPA, and American Cancer Society have all issued warnings about the dangers of AFFF exposure. The danger is most immediate in firefighters who have regularly been exposed to AFFF, but it also extends to residents in areas where AFFF may have been introduced into the ground and water systems, such as in Peshtigo, WA.

If you have been exposed to AFFF or PFAS and have later developed cancer, call Riddle & Brantley today at 1-800-525-7111 to speak with one of our experienced AFFF cancer lawsuit lawyers for a review of your case and to see if you may be entitled to compensation.

At Riddle & Brantley, the consultation is 100% FREE and you never pay ANY attorney’s fees unless you receive compensation for your case.

Manufacturers of AFFF have been aware of the risks associated with exposure to PFAS and have allowed hardworking men and women to be exposed to these dangerous chemicals without fully understanding the risks.

We believe that’s wrong and we’re determined to fight for the rights of firefighters and property owners.

Riddle & Brantley wants to be sure manufacturers of these dangerous chemicals are held accountable for the damages they cause. You deserve a team that is dedicated to fighting for your rights and will show you that Justice Counts.