Damages continue to pile up for Monsanto, the maker of Roundup weed killer. In the latest Roundup lawsuit alleging that the pesticide caused a California couple’s cancer, a jury awarded $2 billion in punitive damages and $55 million in compensatory damages.

According to attorney Gene Riddle:

“Even though the punitive damages are likely to be set aside and reduced by the court, the jury’s action speaks volumes for those allegedly hurt by the toxic compounds in Roundup.”

Monsanto was recently acquired by Bayer AG, a large German chemicals manufacturer with a significant presence in Raleigh, North Carolina.

According to a Reuters report, the California jury determined that “Roundup had been defectively designed, that the company failed to warn of the herbicide’s cancer risk and that the company acted negligently.”

This was the third consecutive case in which juries sided against Bayer AG. Each determined that Roundup played a significant factor in causing cancer.

Does Roundup cause cancer? 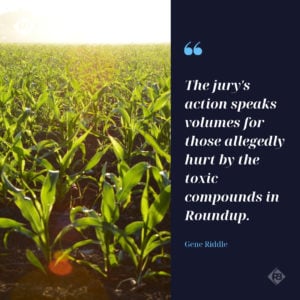 While the Environmental Protection Agency this month issued a report determining Roundup to be safe, the scientific community is divided. In 2015, the World Health Organization’s International Agency for Research on Cancer concluded that glyphosate probably causes cancer.

For more on the alleged dangers associated with Roundup exposure, check out our additional information on the Roundup cancer risk.

In March 2018, a California man was awarded $80 million in a case alleging that Roundup caused his cancer. In August 2018, a San Francisco jury awarded $289 million to a California groundskeeper.

In a statement, Bayer AG called the most recent verdict “excessive and unjustifiable.” The company continues to stand by Roundup, and claims there is no scientific evidence that the pesticide causes cancer.

Bayer AG has vowed to appeal these decisions and fight the ongoing lawsuits.

Have you been exposed to Roundup and been diagnosed with cancer?

Roundup is used on approximately 80% of America’s croplands, and is commonly used in agriculture throughout North Carolina. If you have been exposed to Roundup and been diagnosed with non-Hodgkins lymphoma or other cancer, you may be entitled to compensation.

Our North Carolina Roundup lawyers are actively evaluating these cases. Call us at 1-800-525-7111 or complete the form below for a free, no-obligation consultation. There is never any attorney fee unless we win your case and recover financial compensation for you.

You deserve justice, and we would love to help.