Have you been exposed to Paraquat herbicide (weed killer) and been diagnosed with Parkinson’s disease? If so, you may be entitled to compensation — and you deserve justice. An experienced Paraquat lawsuit lawyer at Riddle & Brantley may be able to help and determine if you qualify for a Paraquat lawsuit. For a FREE consultation regarding your eligibility for a Paraquat lawsuit, please call 1-800-525-7111 or complete the fast and easy form below.

There is never any obligation, and we don’t get paid unless you get paid. If we don’t recover compensation for you in your Paraquat lawsuit, you won’t pay any attorney fees.

Call 1-800-525-7111 today for a free, no-obligation case review with a Paraquat lawsuit lawyer at Riddle & Brantley. We will review your eligibility and if you qualify, help advise you on how to file a Paraquat lawsuit.

Our Paraquat Parkinson’s disease attorneys have more than 225 years of combined legal experience, and we’ve recovered over $600 million in compensation for our clients since 2000 alone (see disclaimer below). You don’t have to do this alone. Call 1-800-525-7111 and let’s review your Paraquat lawsuit eligibility today.

Paraquat is a toxic weed killer (herbicide), commonly used in agriculture and groundskeeping. Paraquat is contaminated with MPTP, a heroin contaminant, which may cause those exposed to Paraquat to suffer from symptoms similar to those associated with Parkinson’s disease.

Those exposed to Paraquat include agricultural workers and groundskeepers, as well as property owners who live near farms where Paraquat is in use through a process known as pesticide drift. Herbicide applicators, chemical mixers, and tank fillers may also be affected. Paraquat exposure may also occur as a result of Paraquat overspray, in which operator error results in application of the toxic chemical on unintended areas.

In recent years, Paraquat has been used as a substitute for the popular herbicide, Roundup, which weeds have become increasingly resistant to (our firm is also handling cases alleging that Roundup causes non-Hodgkins lymphoma and other cancer).

Paraquat is manufactured under many brand names, including:

For a full list of Paraquat trade names, please check out our supplemental page.

Paraquat is a strongly regulated chemical in the United States, and farmers, agricultural workers, and groundskeepers using the herbicide are required to complete an EPA-approved training program. The EPA considers Paraquat a “Restricted Use Pesticide” given its dangers. Despite the concern that Paraquat causes Parkinson’s disease, however, Paraquat is still allowed in the United States.

The Centers for Disease Control and Prevention (CDC) has issued reports indicating that Paraquat is more toxic than other herbicides.

Paraquat toxicity may occur through: 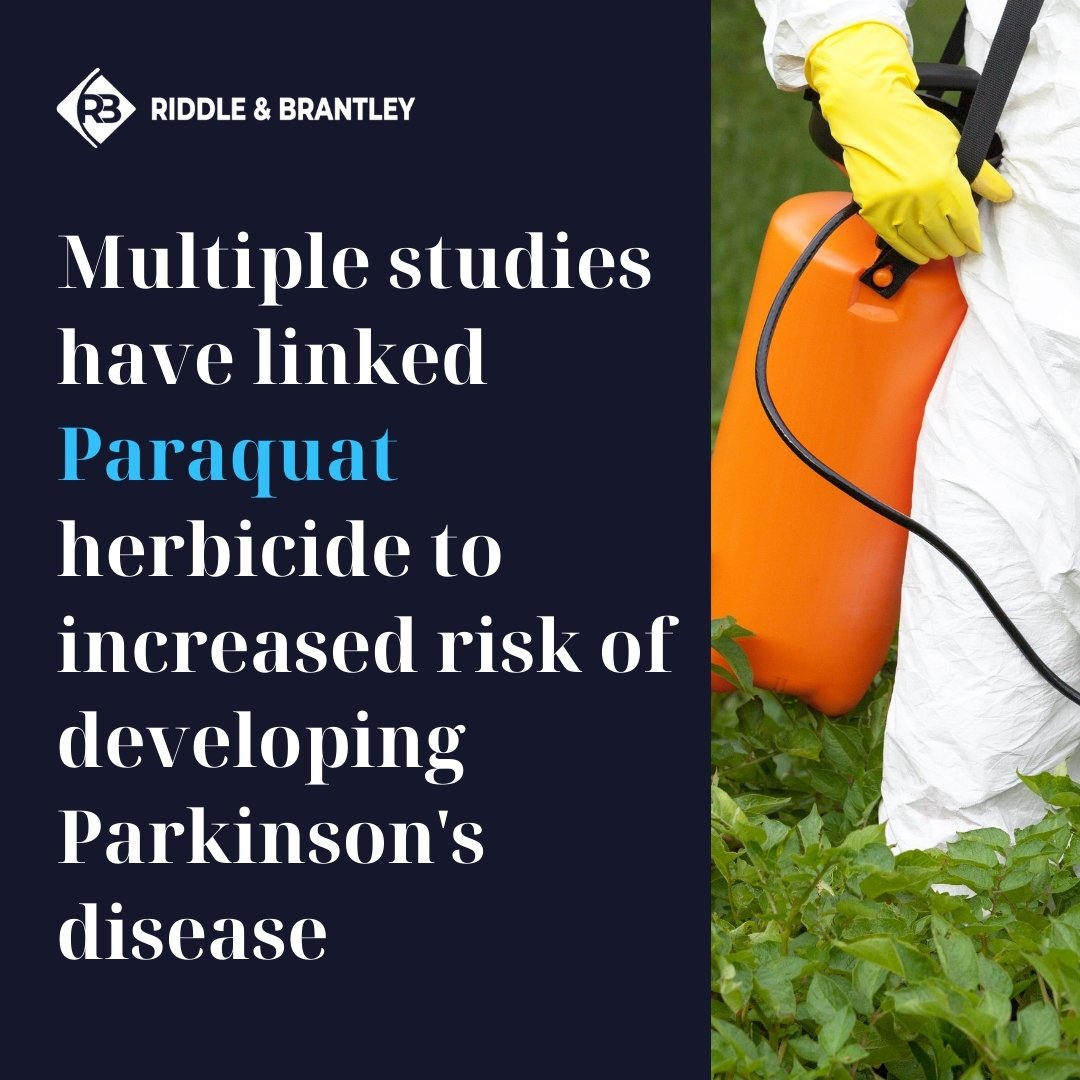 Due to its toxicity and potential for causing Parkinson’s disease among other health problems, Paraquat has been banned (or is in the process of being banned) in the European Union, China, and Brazil.

Riddle & Brantley is actively investigating claims that Paraquat causes Parkinson’s disease, and we would love to help you if we can. For a FREE, no-obligation consultation with an experienced Paraquat lawsuit lawyer, please call 1-800-525-7111.

There are no upfront costs and you won’t pay a dime in attorney fees unless we win your case and you receive compensation in your Paraquat lawsuit.

Please call 1-800-525-7111 today for a free consultation with a Paraquat lawyer handling these claims.

Paraquat exposure was similarly linked to increased risk of Parkinson’s disease in a 2011 study that considered pesticide use and Parkinson’s. The report claimed that “PD [Parkinson’s disease] was positively associated with two groups of pesticides,” including Paraquat.

Another study in 2012 found that “PD risk from Paraquat exposure might be particularly high” in individuals with certain genetic dispositions.

Does Paraquat Cause Parkinson’s Disease?

The potential that Paraquat causes Parkinson’s disease is so apparent that in 2017 the Unified Parkinson’s Advocacy Council urged the Environmental Protection Agency (EPA) to deny the re-registration of Paraquat as an allowable herbicide.

The U.S. Department of Health and Human Services (DHHS) has also initiated a systematic review of the effects of Paraquat exposure on the development of Parkinson’s disease. The review is being conducted under the authority of the National Toxicology Program.

The link between Parkinson’s and Paraquat herbicide is so strong that researchers actually use Paraquat to cause Parkinson’s disease in laboratory animals.

In addition to Parkinson’s disease, Paraquat exposure is considered a potential risk factor in birth defects and cancer.

Roughly one million people in the United States suffer from Parkinson’s disease.

Who is At Risk for Parkinson’s from Paraquat?

Those who have handled Paraquat (including mixers, loaders, and handlers / applicators) may be at increased risk of potentially developing Parkinson’s due to Paraquat exposure. Others may have been inadvertently exposed to Paraquat due to Paraquat drift and overspray, including farm workers, nearby property owners, and schoolchildren attending rural schools. Individuals in each of these groups may qualify for a Paraquat Parkinson’s lawsuit.

Paraquat is a commonly used weed killer and is still allowed in the United States, despite being banned in more than 30 other countries for its known health risks.

Paraquat is most commonly used in agricultural operations involving the following crops:

States where Paraquat is most commonly used include: 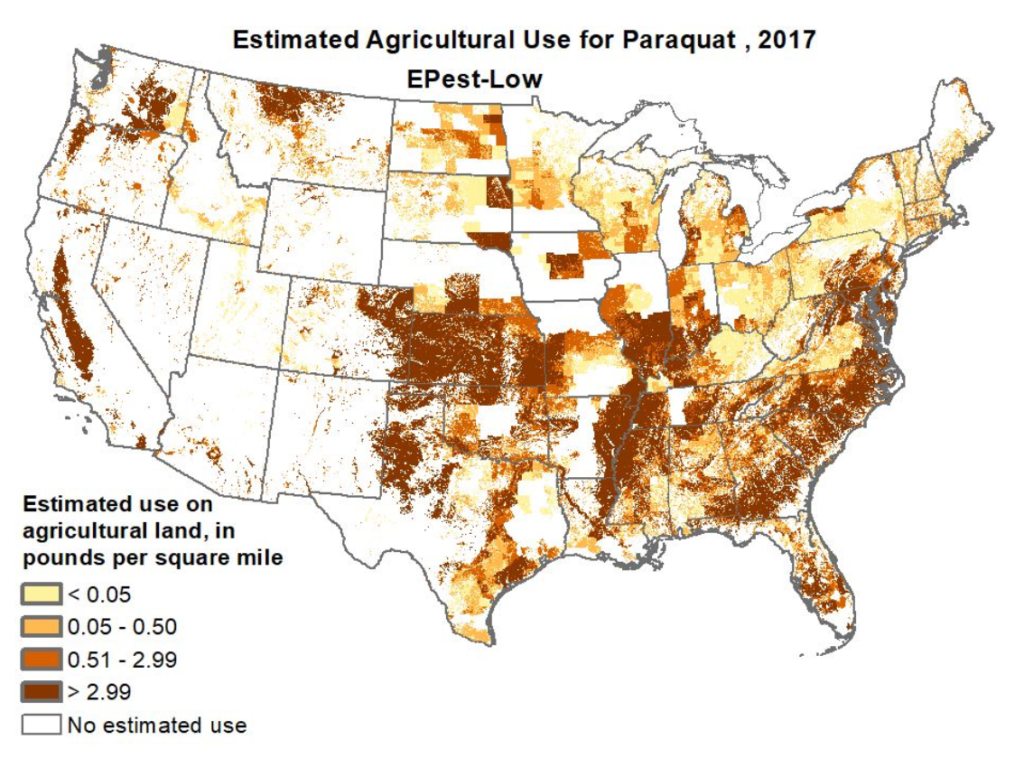 “I’m not sure if I was exposed to Paraquat. How can I tell?”

Determining exposure to Paraquat can be difficult based on the timeline and broad range of herbicide products on the market. Please visit our supplemental page for a list of Paraquat brands, and keep in mind the following:

Our product liability lawyers can investigate your claim and help determine if you were exposed to a brand of Paraquat-containing herbicide that is eligible for a lawsuit. Call 1-800-525-7111 for a FREE, no-obligation consultation today.

In 2017, a lawsuit was filed against Paraquat manufacturers Syngenta and Growmark, alleging that exposure to Paraquat caused Parkinson’s disease among several farmers and agricultural workers. Chevron Chemical, another manufacturer, was later added as a defendant in the lawsuit.

Recent lawsuits allege that Syngenta and Chevron knew that Paraquat was dangerous and failed to warn the public and regulators.

If you or a loved one have been exposed to Paraquat and diagnosed with Parkinson’s disease, you may qualify for a Paraquat Parkinson’s lawsuit and be entitled to Paraquat compensation. Call 1-800-525-7111 to speak with a product liability lawsuit lawyer today.

The consultation is free and there are no upfront costs or attorney fees unless we recover compensation for you.

Since 1985, Riddle & Brantley product liability lawyers have been holding potentially negligent manufacturers accountable for dangerous products. Our attorneys have more than 225 years of combined legal experience handling injury claims, and we’ve recovered more than $600 million in compensation for clients since 2000 alone (see disclaimer below).

Led by experienced injury lawyer Gene Riddle, our firm’s attorneys have received recognition by such prestigious organizations (see disclaimer below) as: 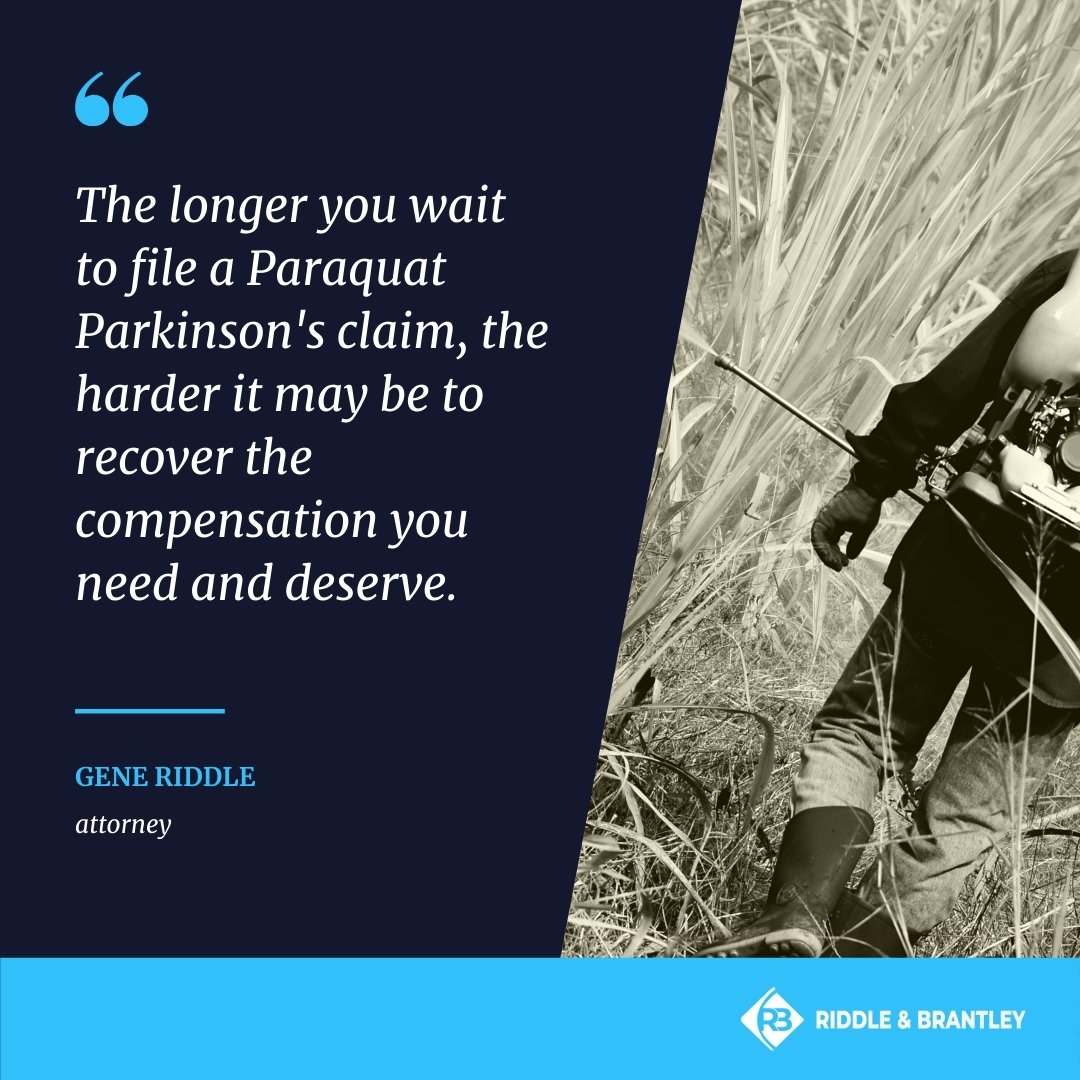 have also been recognized with the AV Preeminent rating from Martindale-Hubbell, the top rating awarded by that organization to practicing attorneys, and Gene Riddle additionally was honored with the 2014 Litigator Award in recognition of his experience and results (see disclaimer below).

Our Paraquat lawsuit lawyers would love to help you if they can. We believe Justice Counts and are committed to holding potentially negligent manufacturers accountable for dangerous products like Paraquat.

For a FREE, no-obligation consultation with an experienced Paraquat lawsuit lawyer at Riddle & Brantley, please call 1-800-525-7111.

We will review your case, advise you on your best available legal options, and if you decide to hire us, we will fight aggressively on your behalf for the compensation and justice you deserve.

Don’t wait — the longer you wait to file a Paraquat Parkinson’s claim, the harder it may be to win your case and recover the compensation you need and deserve.

Call 1-800-525-7111 today and let’s review your case. You may qualify for a Paraquat lawsuit and our injury lawyers would love to help.